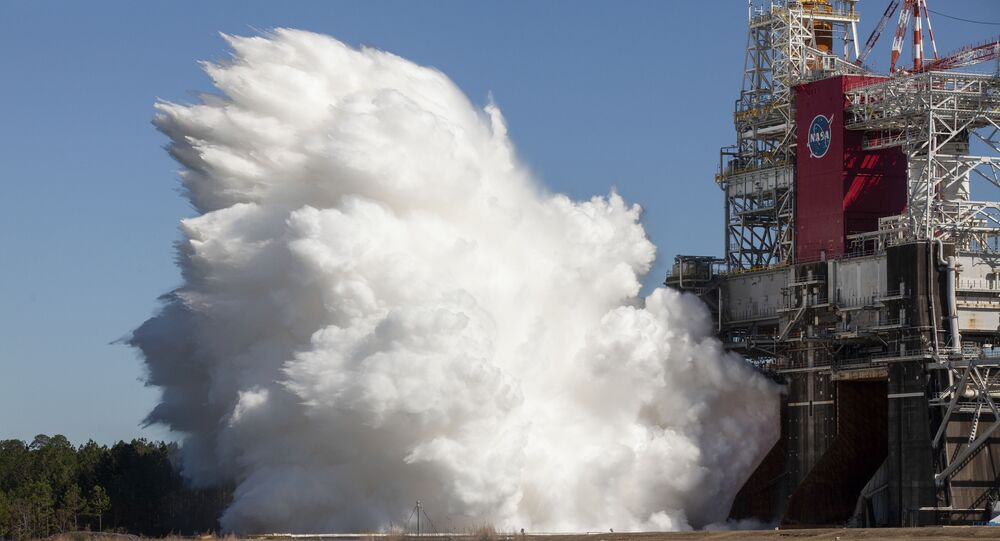 The US space agency NASA conducted a milestone test on Thursday when it fired off the four mighty engines that will soon lift its Space Launch System into orbit in a realistic eight-minute burn.

The “hot fire test,” as it was called, was the eighth test of the engine, but the first one to fire for the full eight-minute duration of a real rocket liftoff. To conduct the test, NASA loaded 733,000 gallons of super-cold rocket fuel into the engine’s fuel tanks, although the engine remained fastened to a test pad at Stennis Space Center in Bay St. Louis, Mississippi.

​The eight-minute burn produced a huge plume of smoke behind a deafening roar, but encountered no visible problems during the test. An attempt at the test in January was interrupted by a problem that forced engineers to cut the engines off after just one minute of burn.

Applause is heard from the @NASAStennis teams as the Green Run hot fire test concludes. After acquiring eight minutes of data, the teams are now beginning their shutdown procedures. pic.twitter.com/6WPzZm76k6

​The RS-25 engines are not new – three of them lifted the Space Shuttle into orbit for decades – but the SLS, a super-heavy lift vehicle intended to ferry both humans and cargo into space, uses four of the huge engines, sufficient to deliver 1.6 million pounds of thrust.

That’s the kind of power needed to launch the Orion spacecraft for the Artemis missions, which aim to return humans to the moon and prepare for a manned trip to Mars.

“All the data that we’ve looked at, and we’ve got a lot more to look at, but everything that we’ve seen in the test today looked nominal,” SLS program manager John Honeycutt said in a press conference after the test. “So I would say that the core stage got an A-plus today.”

NASA Acting Administrator Steve Jurczyk told reporters the agency was “looking for opportunities this year” to launch Artemis I, an unmanned test flight of SLS, Orion, and a series of cubesats, but he noted that unexpected problems could still arise once the core stage arrives as the launch site, which has never been configured for an SLS launch before.

However, the SLS and Orion have competition from a private launch firm, SpaceX, which lifted four astronauts to the International Space Station in November in its Crew Dragon spacecraft. SpaceX is also currently developing the Starship rocket, a huge reusable space vehicle that will dwarf the SLS once mounted atop a booster rocket, but which the company has not yet managed to land without blowing up.