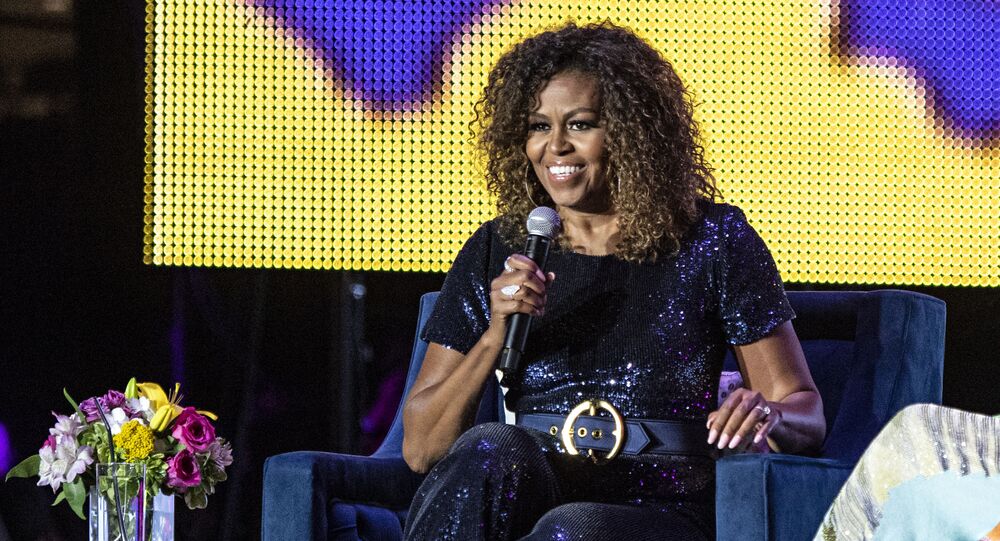 From ordinary people to actors, singers, athletes, and even politicians, it seems Prince Harry and Meghan Markle’s tell-all interview has left no one indifferent and even sparked calls from some to abolish the British monarchy.

Former US First Lady Michelle Obama has weighed in on the bombshell interview Prince Harry and Meghan Markle recently gave to US talk show host Oprah Winfrey. Speaking on NBC’s “Today” programme, the 57-year-old said she wasn’t completely surprised by Meghan Markle’s allegations against the royal family, in particular accusations of racism.

“Race isn’t a new construct in this world, for people of colour. So it wasn’t a complete surprise to, sort of, hear her feelings”, the former First Lady told TV host Jenna Bush Hager.

At the same time, Michelle Obama voiced hope that the family would be able to overcome the rift.

“The thing I hope for, and I think about: this first and foremost is a family, and I pray for forgiveness and healing for them. So they can use this as a teachable moment for us all”, she said.

The former first lady formed a good relationship with members of the royal family during the eight years her husband was in office. The Obamas are said to have an especially good relationship with Prince Harry, as they collaborated on a number of humanitarian campaigns and participated in the Invictus Games, organised for wounded military servicemen and veterans.

The former first lady also enjoys a close relationship with Meghan Markle, whom she has praised several times in her posts on social media for educating girls across the world.

What Did Meghan Markle Say About the Royal Family?

During the two-hour conversation, the couple spoke about their experience as working royals as well as about their decision to leave that life in order to work to become financially independent.

Meghan Markle accused The Firm (aka senior members of the royal family and their staff) of perpetuating falsehoods about the couple and said life in the palace was similar to the coronavirus-induced lockdowns, with Meghan losing her freedom. The duchess said she had suicidal thoughts when she was pregnant, but alleged that the palace’s HR staff refused to help her.

The most explosive claim, however, was the allegation that one member of the family was concerned about the skin colour of the couple’s firstborn.

“Because they were concerned that if he were too brown, that would be a problem? Are you saying that?” Oprah Winfrey asked.

“If that’s the assumption you are making, I think that feels like a pretty safe one”, Meghan replied.

The couple refused to reveal the identity of the royal.

In his turn, Prince Harry said he was upset that no member of the family had condemned the allegedly racist treatment of Meghan Markle by the British press and said that racist and toxic comments made by the UK media was a large part of why the couple left the country.

The allegations caused an uproar across the globe, with numerous celebrities and high-profile figures voicing support for the couple. Former US Secretary of State Hillary Clinton said she was “heartbroken” that Meghan was not “embraced” by the royal family, while President Joe Biden lauded the duchess for her courage.

The accusations also triggered a debate among some over whether it’s time for the United Kingdom to abolish its monarchy.

How Has the Royal Family Responded?

Buckingham Palace released a statement saying it would privately address the shocking allegations of racism. The palace called the accusations “concerning” and said the whole family is “saddened to learn the full extent of how challenging the last few years have been for Harry and Meghan”.

“We are very much not a racist family”.