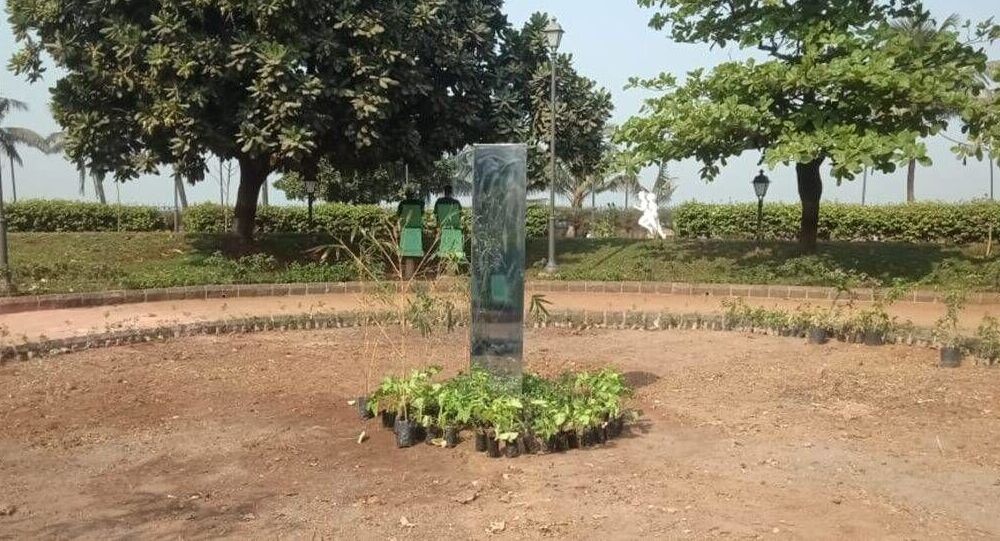 The year 2020 got even weirder when three-sided stainless steel “monoliths” began appearing in random places around the world. It remains unclear who is behind the monolith craze.

A monolith was found positioned earlier this week in a joggers’ park, located in the posh Bandra area of Mumbai, India. This particular monolith was inscribed with the coordinates of a number of forest reserves in India, including Ranthambore, Kaziranga – the home of the Indian rhinos, as well as the Gir Forest in Gujarat state, where the famous Asiatic lions live.

Speaking on condition of anonymity to the Indian Express, the person behind the Mumbai monolith said that this tall and shiny piece of steel is aimed at sparking a conversation about wildlife conservation in India.

The secret sculptor said she wants to raise public awareness about wildlife conservation as some green animal and bird habitats in Mumbai like the Aarey Forest region and Worli Koliwada area are being affected by development and infrastructure projects.

The reason she chose to place the monolith in Bandra’s joggers’ park was to capitalise on its accessible location, her email reportedly added.

For now, it remains unclear for how long the monolith will remain in Bandra’s joggers’ park.

People from Mumbai, including Asif Zakaria, the Municipal Councilor of Bandra, have been excitingly sharing the pictures of this monolith on Twitter.

A monolith, a sheet metal structure that has mysteriously appeared and disappeared across the world, was seen at Joggers Park in suburban Bandra in Mumbai on Wednesday.#Monolith #Mahashivratri2021 pic.twitter.com/eCoaRJ4eGE

​Last year, the first monolith mysteriously appeared in the US state of Utah, following which similar structures have been found across the world, including in Russia, Germany, the Netherlands, Australia, Sweden, the UK, Spain, India, and Poland.

The appearances of these monoliths have been met with several conspiracies, including a suspected alien involvement.

In February of this year, scared locals destroyed a monolith in the Democratic Republic of the Congo by setting it on fire. They feared that aliens or Illuminati could have been behind the monolith.

Indian Start-up Develops COVID-Detecting App That Will Test You via Camera, Give Result in 5 Minutes