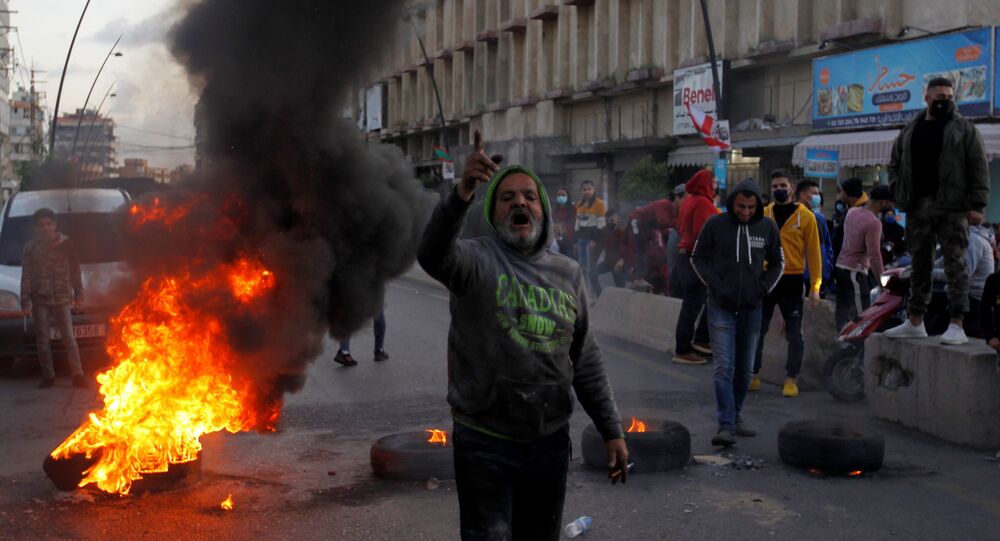 Tensions continue to grow in Lebanon following the dramatic collapse of the Lebanese lira early last week, prompting people to take to the streets and protest the government’s inaction. The country is teetering on the brink of explosion, warns Middle East expert Ghassan Kadi, weighing up the possible scenarios of how the situation may unfold.

On 9 March, anti-government protesters in Lebanon set up new roadblocks and lit tyres on fire amid demonstrations over the government’s inability to tackle the economic crisis and crippling poverty. On Monday, the three main roads from Zouk, Jal el-Dib, and al-Dawra to the capital Beirut were closed by demonstrators.

Previously, protests – dubbed the Tax Intifada or the WhatsApp Revolution – shattered the Middle Eastern state in October 2019. The uprising eventually led to the resignation of Prime Minister Saad Hariri. His successor, Hassan Diab, started talks with the International Monetary Fund (IMF) to receive a $10 billion loan to pull the country back from the economic abyss. However, on 4 August 2020 a massive blast destroyed the country’s biggest port exacerbating the economic situation even further.

Lebanon’s Economy is in Free Fall

In the aftermath of the August 2020 explosion, French President Emmanuel Macron stepped forward urging Beirut to implement a “new political order”. On the surface, the French initiative has thus far failed, according to Ghassan Kadi, a Middle East expert, blogger, and political analyst.

“The Macron initiative ended up with President Aoun appointing Mustafa Adib (a political outsider) as prime minister”, he says. “Faced by ‘chiefs’ who did not comply with their promise to the Macron initiative, Adib resigned before he was able to form government. He was replaced by [Prime Minister-designate] Saad Hariri in October 2020. Five months later, he is still unable to name the cabinet and Lebanon continues to be governed by the caretaker former cabinet that resigned in August 2020”.

On 6 March, Lebanon’s caretaker Prime Minister Hassan Diab threatened to quit in protest at Hariri’s failure to form a new government. The formation of the new cabinet is crucial for kicking off long-anticipated economic reforms in the country which would open the door to multi-billion international aid.

Addressing the nation in a televised speech, Diab warned that the country had “reached the brink of explosion” after the Lebanese lira’s dramatic slump. Arab News suggested last Saturday that the caretaker prime minister’s retreat may further weaken the country’s currency.

“It is sufficient to say that the exchange rate of the Lebanese lira to the USD before the 1975 Civil War was 3 to 1”, recalls Kadi. “It held its value during the darkest days of the war, and began to slide in 1984 reaching a low of 1,500 to 1. But it kept that value from 1989 until 2019. Then suddenly, after the popular uprising in October 2019, the lira has been on a dive, reaching 11,000 to 1 as we speak. The collapse of the Lebanese lira is a simple reflection of what has happened to Lebanon since”.

Trump’s Base May Shed Loyalty if US COVID-19 Deaths Climb, Economy Still Weak