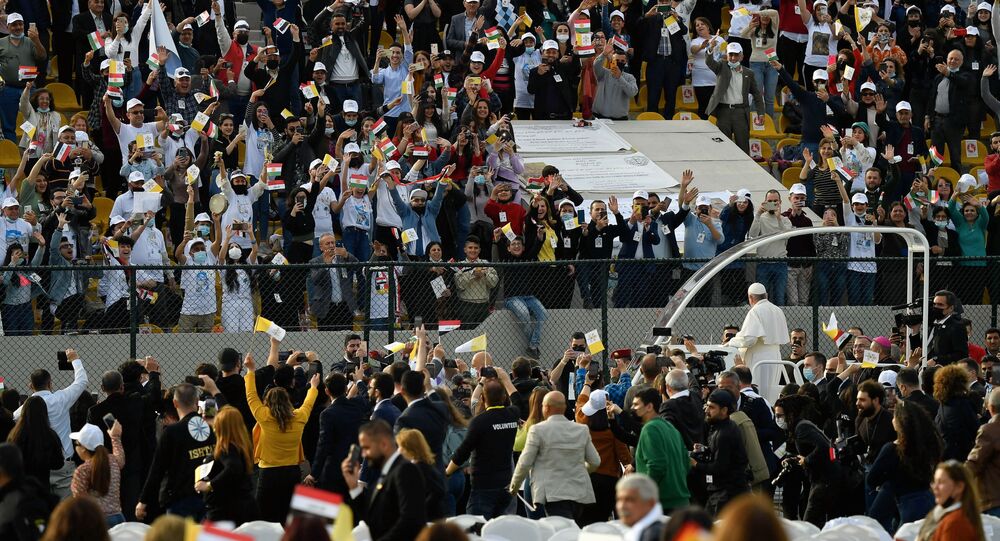 “My next trip will be to Lebanon,” Pope Francis told reporters on Monday, following the conclusion of his controversial trip to Iraq, the birthplace of Abraham. Many health officials opposed the Catholic Church leader’s trip, fearing unvaccinated Christian Iraqis could potentially contract the novel coronavirus amid large-scale religious events.

Speaking to reporters aboard his flight from Iraq to Vatican City on Monday, Pope Francis said that the decision about traveling to Iraq “cooks over time in my conscience” – particularly regarding the COVID-19 pandemic and the contagious disease’s spread.

The religious leader went on to claim God ultimately made the decision for him to travel to the country.

“I prayed a lot about this. And in the end I took the decision freely,” Francis said, as reported by the Associated Press. “It came from inside. I said ‘He who makes me decide this way will look after the people.'”

Francis’ remarks were delivered to reporters shortly after he left Iraq on March 8.

At the welcome ceremony last week, Pope Francis notably told Iraqi attendees – many of whom were diplomats and civil authorities – that religion and the name of God should never be used “to justify acts of murder, exile, terrorism and oppression.”

“Religion, by its very nature, must be at the service of peace and fraternity,” he said.

Francis claimed Iraq, in recent decades, has been subject to terrorism and violence that is rooted in the refusal to accept “peaceful coexistence of different ethnic and religious groups, different ideas and cultures.”

On Sunday, the religious leader took to several northern Iraqi cities previously under Daesh control at one point, including Qaraqosh, Mosul and Erbil.

“You have protected the Christians when Daesh attacked,” he said while visiting the Kurdistan region.

The same day, Francis held mass in Erbil. The stadium, which has a 20,000-person capacity, was expected to seat 10,000 individuals for the event.

During mass, Francis told attendees the “tragic” departure of Christians from the Middle East country “does incalculable harm not just to the individuals and communities concerned, but also to the society they leave behind”

While the 84-year-old religious leader and his entourage were fully vaccinated prior to their trip to Iraq, many health officials advised against the trip out of fear that a large-scale event, like the Erbil mass, would be a “super-spreader event.”

It’s worth noting that Iraq began its COVID-19 vaccine rollout on Tuesday, March 1, following the delivery of 50,000 Sinopharm vaccine doses from China.