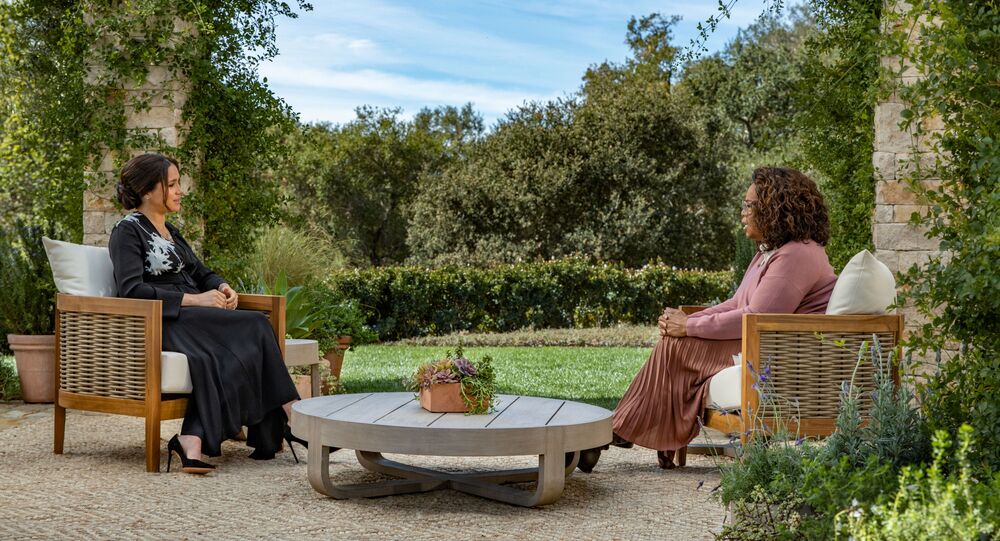 Meghan Markle and Prince Harry’s explosive interview with Oprah Winfrey has sparked controversy over shocking revelations about their relationship with the Royal Family. It prompted veteran Indian actress and talk show host Simi Garewal to accuse Meghan of “lying” and calling her “evil”.

After creating a storm on social media by accusing Meghan Markle of “lying”, “using the race card to gain sympathy”, and calling her “evil” over her interview with Oprah Winfrey, Indian actress and talk show host Simi Garewal has walked back on some of her remarks.

In the sensational interview, Meghan accused the British Royal Family of racism, lying, and pushing her to the brink of suicide.

​On Monday, netizens started trolling Garewal for making claims that Meghan “is lying to make herself a victim”, considering the fact that the veteran actress is not even related to the Royal Family.

One user commented that Garewal doesn’t have to withdraw the word “evil”, claiming that it’s quite apt for Meghan. In response, Garewal shared a link to the article and replied, “…evil was not right. I got a bit angry when she lied that she didn’t know anything about him. I’ve read masses of articles…”. The actress was making a reference to Meghan saying that she was “naive” to marry Prince Harry and claimed she hadn’t done research on him or his family prior to the wedding.

Thanks Aranya (what a beautiful name! 👌)…but evil was not right. I got a bit angry when she lied that she didn’t know anything about him. I’ve read masses of articles.. but pls read this:https://t.co/5aP6aXftqb

Agree but you could probably justify evil for her as she broke a family and drove wedge between brothers and father-son, at least that’s what seems like . But she is self serving for sure.

​Many users criticised Garewal for being judgemental without knowing the other side of the story, seeking attention, and calling her “misogynist”.

Without knowing any of them personally, to pass viscous remarks on her (only her, not the guy) reeks of misogyny, deeply rooted racism and a misplaced sense of allegiance towards the royal fam- which is essentially a racism institution.
Also, extremely petty.

Passing an opinion is not a judgement – it’s just an opinion!! A personal assessment…that’s all.

​Is Harry a ghost? He was also there, making allegations against his own family or maybe it just bothers you that this “evil” Meghan has DARED to speak? Be careful there

​Meghan and Harry got married on 19 May 2018. They were blessed with a son, Archie, in May 2019. Last year, the former Duke and Duchess of Sussex stepped back from their roles as members of the British Royal Family and moved to North America. The couple is now expecting a girl.