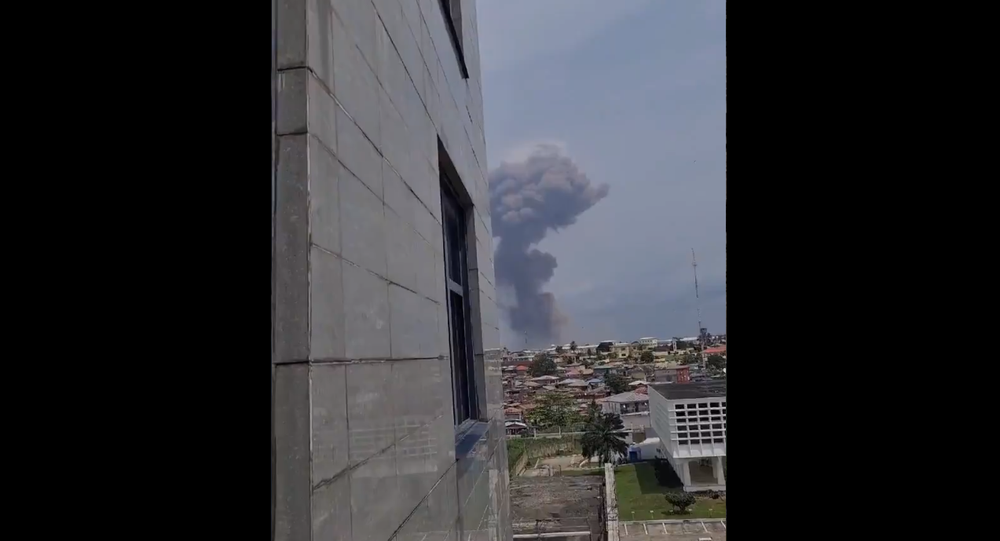 According to local media reports, a series of 5 explosions shook the city with a small interval of time in between each one, with the first blast occurring at around 2 pm local time. Authorities evacuated the houses around the base as the detonations continued, although with progressively less impact.

At least 17 people died and 420 were injured in the explosions that occurred on Sunday at a military base in Equatorial Guinea’s biggest city, the Ministry of Health data revealed.

The incident occurred in the port city of Bata, in the northwest of the country. Emergency and rescue services reportedly took the victims away from the site.

Local media also shared the country’s president Teodoro Obiang’s statement on the accident, in which he said that the explosions were triggered by “negligence and carelessness” in handling dynamite deposits.

“…the city of Bata has been the victim of an accident caused by the negligence and carelessness of the Unit in Charge of Care and Protection of the Dynamite and Explosive Deposits attached to the ammunition depots of the Nkoatama Military Barracks, which caught fire from the burning of the farms in their vicinity by the neighbors, eventually exploding the dynamite, explosives and ammunition depots,” the statement reads.

The president of the country also appealed to the international community for help in mitigating the consequences of the catastrophe, large-scale for this Central African nation.

“Considering the magnitude of damage caused … I launch an appeal to the international community and national benefactors to provide their support to Equatorial Guinea in these difficult times that coincide with the economic crisis derived from the fall in oil prices and the COVID-19 pandemic,” Obiang said.

Earlier, the local AhoraEg outlet had reported that the shock wave caused the collapse of many homes and the interruption of telephone communication for several hours.

More people are reportedly believed to be dead or trapped under debris, and the country’s Ministry of Health appealed for blood donors and volunteer health workers to go to the Bata Regional Hospital. The outlet also posted photos of the incident, showing destroyed houses and columns of smoke.

One of several videos that were being shared on social media shows the exact moment of one of the blasts, which some of the observers believe to be preceded by “yellow sulphurous smoke.”

​Equatorial Guinea, a country rich with oil, is dealing with a double economic shock caused by the COVID-19 pandemic and a decline in crude oil prices, which account for roughly three-quarters of the country’s revenue.

S. Africa Discourages Use of Parasite Drug Ivermectin in COVID-19 Patients Outside Trials