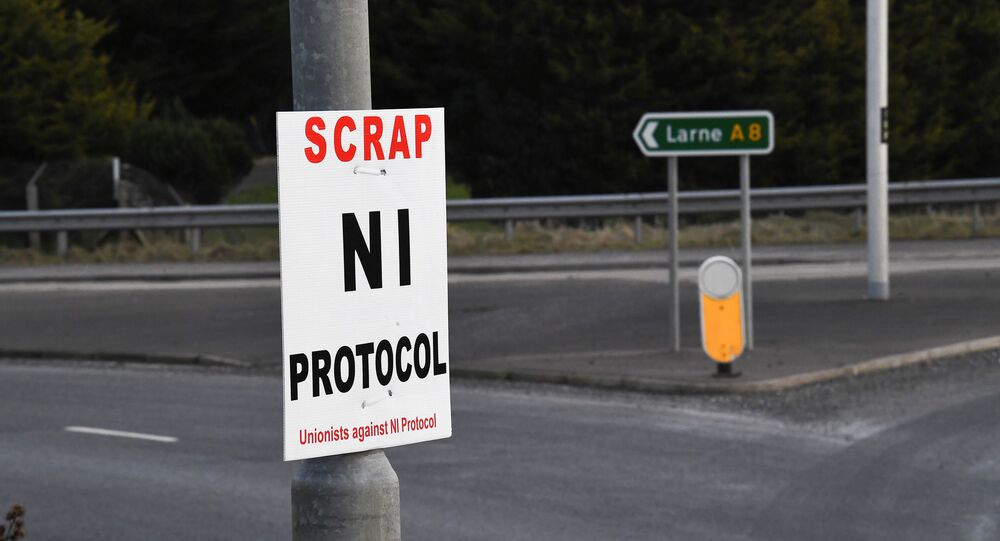 The European Parliament has refused to fix a date for its vote on the post-Brexit trade deal with the UK, infuriated by the British government’s decision to extend a grace period for checks on some food imports to Northern Ireland – something that Brussels perceives as a violation of the Brexit deal.

The UK decision to extend a grace period for checks on some goods heading to Northern Ireland, which is still in the EU single market, has met with furious backlash, with Brussels threatening to resort to “infringement proceedings” against the British government, reports the Financial Times.

The waiver from rules agreed upon by the two sides that allowed supermarkets and suppliers to dodge some of the bureaucratic hassle typically linked with the food trade was due to expire on 1 April, with the UK announcing on Thursday an extension until 1 October.

The decision was branded as a “very negative surprise” by Maros Sefcovic, the vice president of the European Commission.

Sefcovic, who is in charge of overseeing the post-Brexit trade deal hammered out between Brussels and London  last year, was cited as saying that the European Commission regarded the developments as a breach of the 2019 divorce treaty.

​The Northern Ireland protocol had been set in place to prevent a hard trade border on the island of Ireland after the UK exited the European Union in the wake of Brexit.

“We are currently preparing it and it would be really something coming to our table very soon. The most precise term I can give you is really very soon,” he was quoted by the FT as saying.

The vice president of the European Commission did not offer any further details regarding the possible legal options, or whether the matter might be considered in the European Court of Justice.

Britain’s divorce terms with the EU envisage a spate of options for resolving any disputes that might arise, and arbitration could potentially lead to penalties such as fines and tariffs.

EU Vice-President @MarosSefcovic : “This amounts to a violation of the relevant substantive provisions of the Protocol.”

“This is the second time that the UK government is set to breach international law.” pic.twitter.com/H9Mi1Yt9Ke

​The threat of legal action against the UK is not the first, as in October last year, the commission launched infringement proceedings against the British government for breaching its obligations under the Withdrawal Agreement after the latter tabled the ‘United Kingdom Internal Market Bill’ on 9 September 2020.

If adopted, the internal market legislation, seen by Brussels as ‘flagrantly violating’ the Protocol on Ireland / Northern Ireland, would have allowed Britain to override elements of the 2019 Brexit divorce deal.

The legal action did not proceed as Johnson removed the offending clauses in December ahead of the signing of a landmark trade deal with Brussels.

The current frustration in Brussels comes as David Frost, the Cabinet Office minister, and formerly Boris Johnson’s Brexit negotiator, announced that the UK was extending a series of exemptions designed to ease trade between Northern Ireland and Great Britain to allow for negotiations on permanent arrangements to continue.

The Northern Ireland protocol, as per the withdrawal agreement, means that Northern Ireland remains aligned to various EU rules, accordingly requiring checks on goods arriving into the region from Great Britain.

Prime Minister Boris Johnson’s spokesman on Thursday said that the EU had been informed about its decision at official level earlier in the week.

“We also informed the Irish government earlier this week, and then Lord Frost last night in his call with Sefcovic obviously discussed this at length and set out the rationale and reasons for it,” said the spokesman, referring to discussions between David Frost, in charge of ties with the EU, and European Commission Vice President Maros Sefcovic, according to Reuters.

Rejecting EU’s accusations, the spokesman added that such “types of operational measures are well-precedented and common in other international trade agreements and are entirely consistent with our intention to fulfil our obligations under the protocol in good faith.”

Amid the row, UK officials have been reportedly saying that the EU was moving too slowly in negotiations to avoid potential supermarket shortages in Northern Ireland.

UK Prime Minister Boris Johnson made an effort to placate Brussels, saying the government was taking “temporary and technical measures” to ensure an uninterrupted trade flow.

“I’m sure with a bit of goodwill and common sense all these technical problems are eminently solvable,” he stated on Thursday.

Downing Street insisted that it remained “committed” to the Northern Ireland protocol.