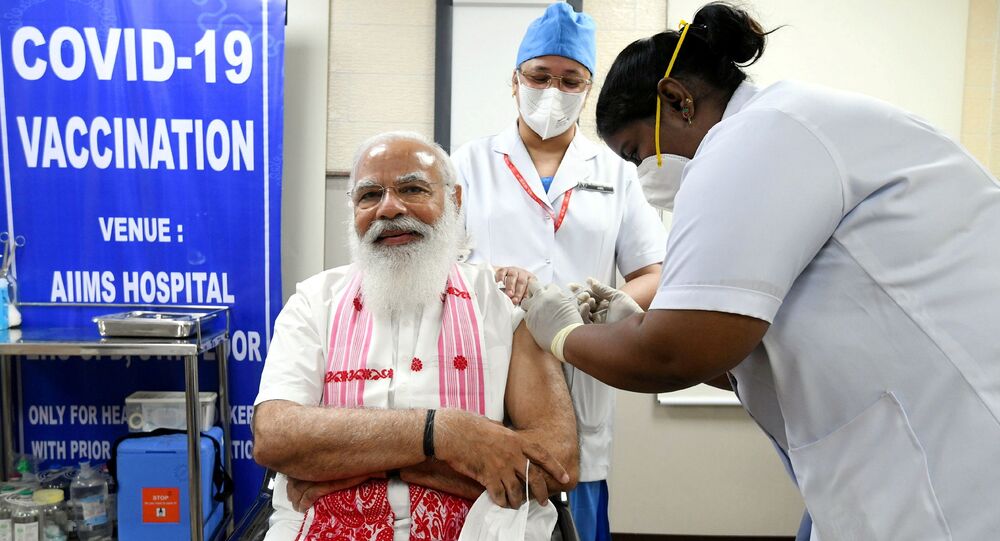 The COVID-19 vaccine is being given for free at government hospitals, while people will need to pay INR 250 ($3.40) for it at private facilities. The inoculation drive began in India on 16 January and in the first phase frontline workers were given the jab.

Indian Prime Minister Narendra Modi has received the first dose of a COVID-19 vaccine. The PM received his jab on Monday morning at the All India Institute of Medical Science (AIIMS) in the capital city Delhi.

Modi was the first beneficiary in the second phase of the nationwide vaccination campagin. Nurse Nivedita from the union territory Puducherry administered the Indian-developed vaccine Covaxin.

​Covaxin was developed by Bharat Biotech and the state-run Indian Council of Medical Research (ICMR). It is yet to submit phase three trial data to the drug regulator for final approval. The Indian drug regulator formally approved the emergency use of two coronavirus vaccines, Covaxin and Oxford/AstraZeneca’s drug, in January as the Modi government planned to inoculate approximately 300 million people by end of the year.

After the jab, Modi wrote on his Twitter account, “Remarkable how our doctors and scientists have worked in quick time to strengthen the global fight against COVID-19”.

He encouraged those eligible to get themselves vaccinated during the second phase of the vaccination drive that kicked off on 1 March. People over 60 and those over 45 with comorbidities are eligible to receive the jab during this phase.

​After administering the vaccination to the prime minister, Nivedita told media persons that Prime Minister Modi had asked her where she was from and told her that he did not know she managed to so smoothly inoculate him.

​Indian citizens will be able to register and book an appointment for vaccination, anytime and anywhere by using the Co-WIN 2.0 portal or through the Arogya Setu app.

India has reported the highest number of coronavirus cases in the world after the United States and in recent weeks cases have been surging in states like Kerala and Maharashtra. The country has so far vaccinated over 12 million healthcare and frontline workers.

Beijing on App Ban: If Tagore Poems, Yoga Are No Threat to China, Why Would PUBG be a Risk to India?

Rapid Test Kit for COVID-19 Developed by Indian, Israeli Scientists to Give Results in Seconds