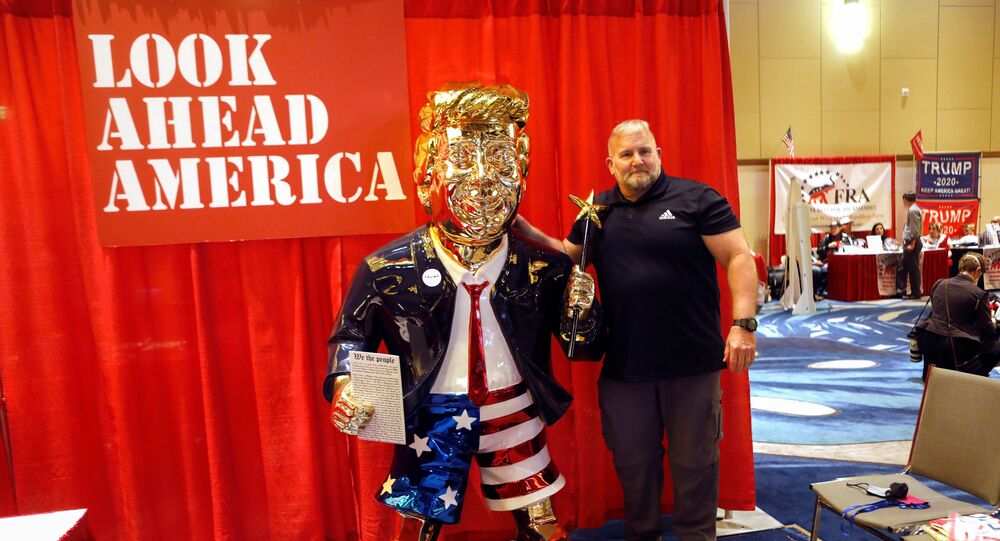 A golden statue of the former US president, Donald Trump, appeared to steal the show at the CPAC conference after appearing on the site in Orlando, Florida, on Thursday. Netizens immediately dubbed it the “golden calf” and grilled the biblical subtext online.

Tommy Zegan, the artist behind the golden statue of Donald Trump at CPAC, is an American expat living in Mexico, revealed Politico Playbook on Saturday. Zegan reportedly crafted his sculpture south of the border, in Rosarito, according to the outlet.

According to Zegan, he created the 200-pound fiberglass statue with the help of three men in Rosarito, then transported it to Tampa, Florida, where it was painted with chrome – only for this trip to finish in Orlando at the CPAC conference, where the golden Trump stole the show on Thursday.

Those willing to own the statue, according to the sculptor, now have that opportunity.

“Gold Trump statue was made in Mexico. They’re not sending us their best”, one user wrote in a tweet.

“The golden Trump statue was made in Mexico by an American expat who lives there, because the universe is intent on destroying the possibility of satire.”, another noted.

​Trump’s notorious promise on Mexico paying for his border wall in Texas was also recalled immediately.

The golden statue of Donald Trump that has caused a stir at CPAC. was made in Mexico. (Mexico didn’t pay for it either)

​Some suggested that the statue might have inherited more Mexican features than appeared at first sight.

If it was made in Mexico, has anyone checked to see if it’s really a piñata?

Earlier in the week, the statue was blasted online for what some users saw as its biblical undertone, comparing it with the golden calf – the idol that, according to Christianity’s Old Testament, was worshipped by Israelites in the absence of Moses who ascended Mount Sinai to receive the Ten Commandments.

‘They Are All The Same to Him’: Watch Biden Confuse Syria and Libya Multiple Times During G7 Speech