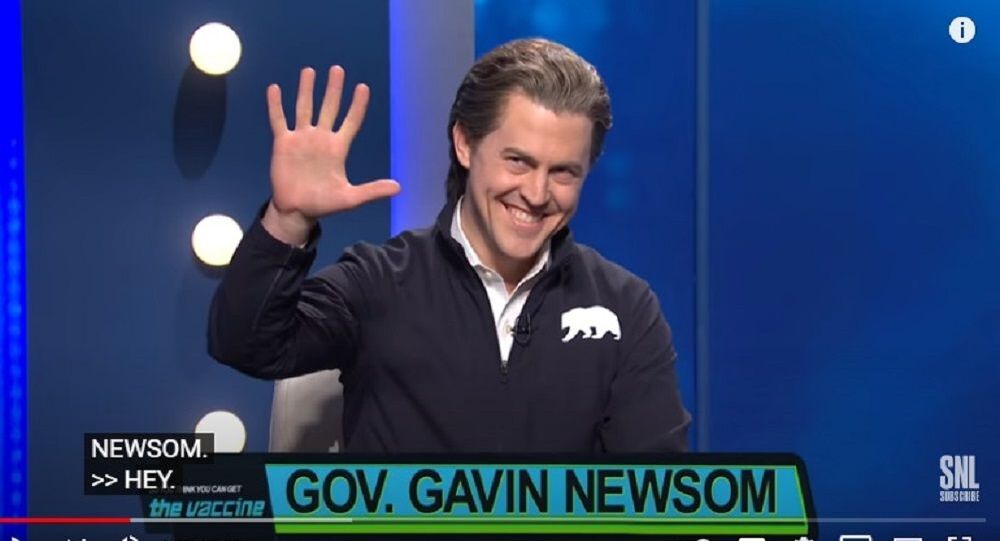 In a game show setting, a number of contestants were to compete for a much-desired coronavirus inoculation – something that has drawn long queues of those willing to be immunised against the novel virus in a number of US states.

A Saturday Night Live skit has taken jabs at New York’s Andrew Cuomo and some of his fellow Democratic governors, Gavin Newsom of California and Michigan’s Gretchen Whitmer, making viewers roll on the floor laughing. The three governors, played by SNL cast members, acted as judges on the “Dr Anthony Fauci-hosted” game show titled “So You Think You Can Get the Vaccine?”, where contestants had to appeal to the panel of judges to get a shot.

“I am on the waiting list to get on that show to figure out if I am eligible to get the vaccine yet”, one netizen posted laughingly, with others tweeting their ROFLing emojis.

Cuomo (Pete Davidson) was introduced as being “currently under fire for futzing with old, dead people and also the kind of sexual harassment allegations that make you say, ‘Yeah, I could see that’”.

The real governor has indeed been of late implicated in multiple scandals: he has faced harassment accusations by two former female aides, as well as has been lampooned for allegedly undercounting COVID-19-related deaths across his state’s nursing homes.

When given the opportunity to decide who counts as an essential worker in their respective states, Cuomo dropped: “tough guys, wise guys, rich guys, and Five Guys”, whereas Newsom, who depicted the coronavirus situation in his state as “teeth white, bodies tight, COVID pretty bad”, stated that California was immunising “police, hospital staff, neuropaths and psychics”.

Whitmer, who was last to join the panel, said Michigan was prioritising the shots for “fishers, truckers, and trappers”.

The president’s chief medical adviser, Fauci, played by SNL’s Kate McKinnon, without further delay explained the idea behind the contest that is at the centre of the show:

“The vaccine shouldn’t be a competition but Americans will only want to get it if it means someone else can’t”, Fauci explained, before introducing a slew of contestants.

One lady, for instance, described herself as an essential worker, saying she worked at the IT department of the adults-only website OnlyFans and had herpes, while another was aiming to pass as an old, and thus eligible for a vaccine, woman, because she allegedly wanted to enter a relationship with a guy who had just got out of a previous one.

The vaccines were ultimately denied to them, but consolation prizes awaited those who had lost the vaccine contest – a Pfizer visor (the rhyming was apparently intended) and Maxine (which rhymes with “vaccine”) – a grumbling, blue-haired old woman character from Hallmark greeting cards.

At the end of the sketch, the governors agreed to give the vaccine to an 85-year-old contestant who described himself as the “world’s proudest granddad”.

However, the decision appeared to be no more than paying lip service, as the man couldn’t sign up for it online (“on what?” he queried), as was initially proposed to him, and he couldn’t find a young person to do him a favour – “click refresh” for the necessary “three straight days”.

“But if you do feel sick”, Davidson’s Cuomo came up with a friendly recommendation to the old man, “make sure you leave the nursing home and get to the hospital. Wink”.

Despite many applauding SNL’s effort, quite a few suggested it was “not exactly comedy gold”, fuming it is “stupid” and far below the general expectations from the iconic comedy programme, which has been running on American television since 1975.

The show must have changed writers because the skits are not funny or clever! why the change?

The other day, the United States government greenlit Johnson & Johnson’s single-dose COVID vaccine, enabling millions more Americans to be vaccinated in the coming weeks – thus setting the vaccine up for additional approvals around the world.

The J&J jab is the third vaccine to be authorised in the country, following those from Pfizer-BioNTech and Moderna, both of which require two doses.