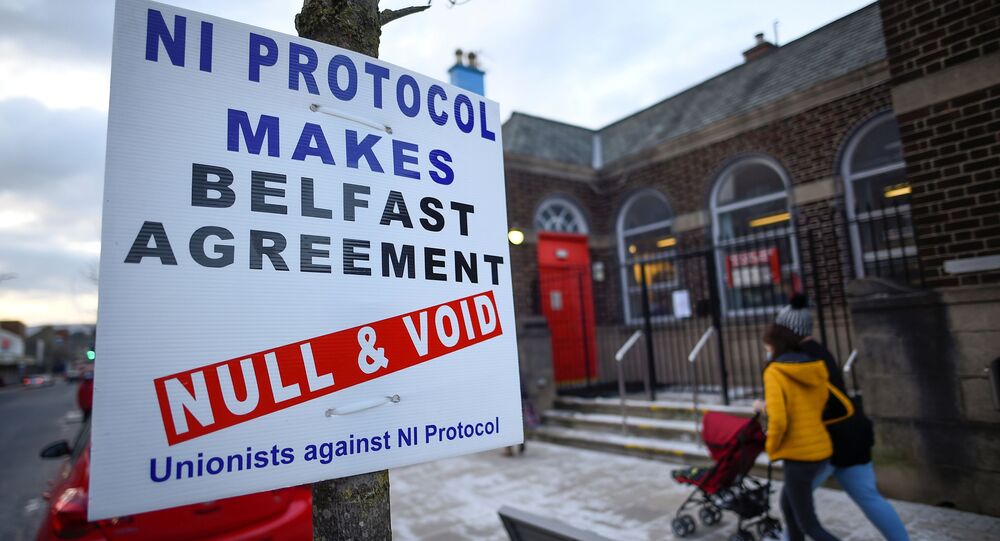 The development comes as the United Kingdom and the European Union attempt to settle their differences over the Northern Ireland Protocol, which reignited the controversial issue of Irish unity and threatened to torpedo the Brexit agreement.

Gordon Lyons, Northern Ireland’s Minister of Agriculture, Environment, and Rural Affairs, has ordered local officials to halt the construction of permanent border control posts (BCP) for post-Brexit checks in the country. The official made the announcement in an interview with the PA news agency. Lyons said the move was a response to “practical difficulties” caused by the Northern Ireland Protocol.

“The risk to Northern food supply in those circumstances will remain high so there’s a lot of practical difficulties with all of this and that’s causing us a huge amount of uncertainty. It’s a real nightmare for us and it’s going to be causing us an awful lot of problems”, the official said, adding that he had also ordered local officials to stop recruiting staff for BCP and end charges levied on traders at the nation’s ports.

The announcement caused a stir among Northern Ireland’s officials. According to the BBC, the minister’s subordinates are trying to understand whether they can follow Lyons’ orders, while three ministers have called for an urgent meeting of the Northern Ireland Executive (the country’s devolved government). Infrastructure Minister Nicola Mallon from the Social Democratic and Labour Party (SDLP) expressed doubt about whether Gordon Lyons could make such a decision without the government’s approval and described his move as “controversial and cross cutting”.

​Her stance was somewhat echoed by a UK government spokesman, who said the issue is “a matter for the Northern Ireland Executive”. “We remain in close contact with them”, the spokesman said.

Gordon Lyons also called on Downing Street to scrap the Northern Ireland Protocol, saying the accord is “not working” and the situation will only “get worse at the end of the grace period”.
Sinn Fein Deputy First Minister Michelle O’Neil branded Lyons’ order and statement a “stunt”, reminding that the agricultural minister’s party had supported Brexit.

Previously, when the former DAERA Minister took a similar stance, his Permanent Secretary took forward the Executives responsibilities. The Protocol is a consequence of Brexit. The DUP championed Brexit & must own the consequences. Business and society need certainty, not stunts.

What is the Northern Ireland Protocol?

In 2016, the United Kingdom voted to leave the European Union. Parting ways with the bloc meant Britain would no longer enjoy being in the EU’s single market, which guarantees the free movement of goods, services, and labour between its members states. After years of negotiations, the sides finally struck an agreement on what their post-Brexit relationship would look like.

However, it seems what worked perfectly on paper is working with difficulties in reality. Since the end of transition period there have been major disruptions of food supplies and other deliveries due to checks at the ports.

Things got worse last month when the European Union threatened to use Article 16, which allows both sides to suspend the measure if it causes “economic, societal, or environmental difficulties”. The announcement came in response to delays of shipments of the coronavirus vaccine developed by AstraZeneca to the bloc. Both the European Union and the United Kingdom bought the inoculation, but the delays only affected the European Union.

Tensions between the two sides prompted London and Brussels to sit down for talks. UK Cabinet Office Minister Michael Gove called on the bloc to make amendments to the Northern Ireland Protocol, something the EU refused to do. Gove also wrote a letter to European Commission Vice President Maros Sefcovic asking Brussels to show flexibility in some issues. Among other things, the official asked the EU to extend grace periods for food and medical supplies that are scheduled to end in April, until January 2023.

Three rounds of negotiations have so far borne no fruit. Northern Ireland’s First Minister Arlene Foster branded the talks hugely disappointing. Together with fellow MPs from the Democratic Unionist Party (DUP), Foster plans to file a lawsuit in order to challenge the Northern Ireland Protocol. The DUP has for a long time argued that the accord threatens Belfast’s membership in the United Kingdom.

‘No Good Would Come of it’: Prince Philip Reportedly Believed the Sussexes’ Interview Was ‘Madness’