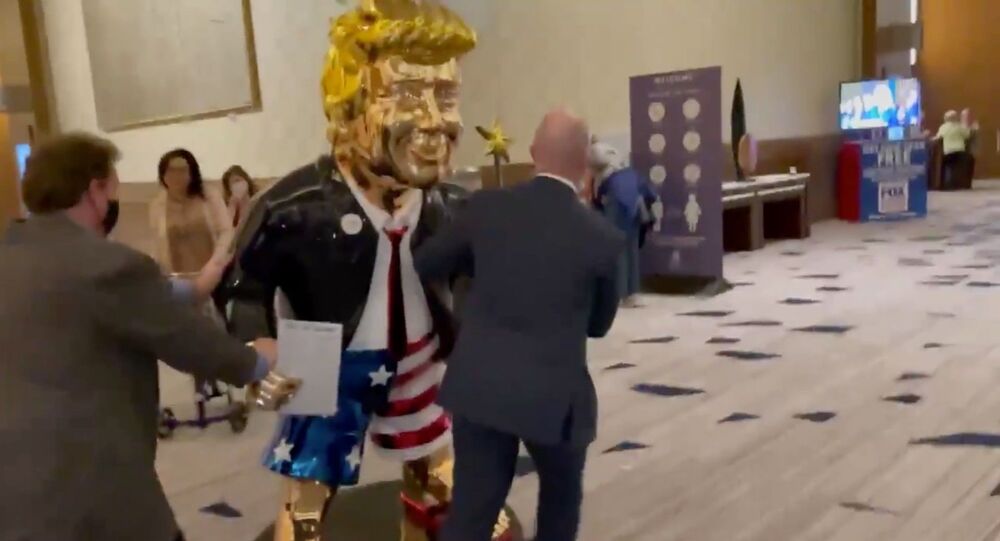 The Conservative Police Action Conference (CPAC) is an annual event hosted by the American Conservative Union and attended by a variety of elected officials from across the nation. This year’s event will likely serve as an opportunity for 2024 hopefuls looking to appeal and gain support from party members.

A golden statue of former US President Donald Trump appeared late on Thursday at CPAC in Orlando, Florida, quickly prompting a mass lifting of eyebrows as netizens highlighted its biblical undertones.

Video of the statue, which was captured and shared online by Bloomberg reporter William Turton, shows two individuals wheeling it away as event attendees cheer and even begin chanting, “four more years.” Several onlookers are seen snapping photos and expressing their amazement at the sight.

As for the golden statue itself, the piece has Trump wearing his signature suit-and-tie stylings, but rather than being fitted with traditional slacks, the former commander-in-chief is seen wearing some flip-flops and shorts emblazoned with the American flag.

And yet, that’s still not all that can be seen. The Trump statue also comes with its very own star-topped wand, which the sculpture is seen holding in its left hand. A copy of the US Constitution appears to be in the smiling statue’s right hand.

Within moments of being shared, the floodgates were opened and with it came a slew of criticism from netizens who quickly began dishing out jokes about the infamous golden calf story from the Old Testament of the Bible.

​In short, the Old Testament scripture touches on how Israelites worshipped a golden calf in the absence of Moses as he went up to Mount Sinai to receive the Ten Commandments. The story itself highlights the falsehoods of idolatry.

The annual political conference, which is scheduled to close out this weekend, will see Trump mark his first post-presidency appearance on Sunday, after having been acquitted by the Senate in his second impeachment trial.

Reports suggest that Trump may use the time to fire off a couple remarks against US President Joe Biden, and possibly begin leaving some breadcrumbs to his much-anticipated 2024 presidential bid.