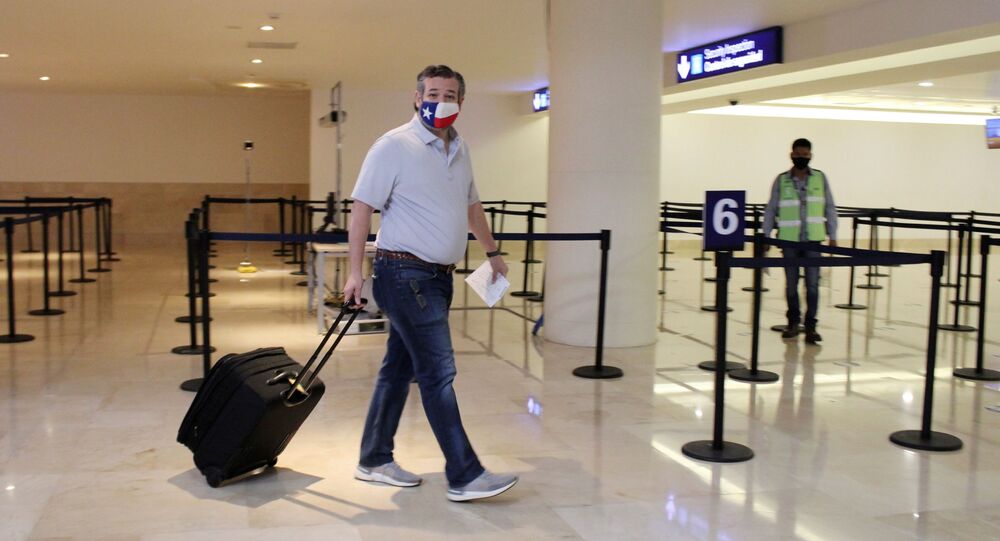 Demands for Republican Ted Cruz to resign had been made following the Texas senator being spotted going on holiday to Mexico as his state faces a weather crisis.

Texas senator Ted Cruz of Texas received a prank in the locker room of the Senate gym on Wednesday according to an NPC report.

Color printed photos of Cruz heading to his holiday in Cancun as his home state grapples with an ongoing weather crisis. The images showed the senator dining his polo shirt and Texas flag mask, according to NBC, who saw the images.

“The rendering featured a manipulated photo of Cruz from his well-documented trip to Mexico, dragging his luggage across an arctic landscape while holding a tropical cocktail garnished with a slice of fruit in his other hand”, NBC wrote.

According to the report. The photos were taken down later on Wednesday. It is not known who is responsible for the jibe but only current and former senators are permitted to enter the gym.

​This comes as Cruz received widespread outrage for his family holiday in Mexico earlier this month as the winter storm Uri swept across Texas, leading to around 4 million of the senator’s constituents losing power, and millions more unable to access drinkable water.

Dozens of people have died as a result of hypothermia from unheated houses, or from accidents in an attempt to heat their homes.

Houston police also confirmed that they received a request for security from Cruz’s office as state personnel were being used to respond to the weather crisis.

Tests were leaked from Cruz’s wife, who complained about the cold temperatures and invited friends and neighbors to come and join them on the family trip – citing a direct flight, an available hotel, and coronavirus testing.