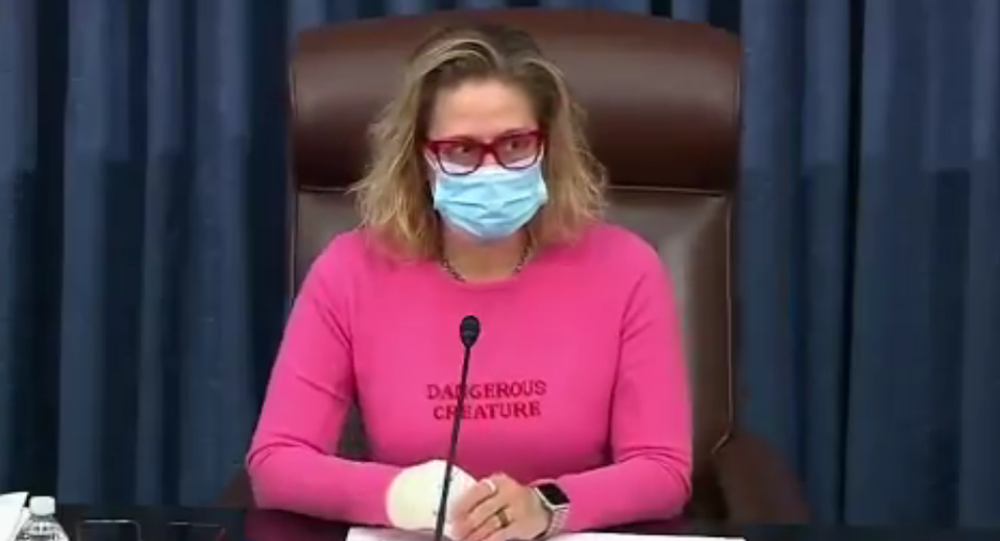 The US Congress has been criticized for what some consider to be an antiquated dress code, requiring women’s dresses or tops to conceal their shoulders, and men to wear suits and ties.

When US Sen. Kyrsten Sinema (D-AZ) came to preside over the legislature’s upper chamber on Tuesday, she was wearing a hot pink sweater with the words “Dangerous Creature” emblazoned across the front.

​The 44-year-old openly-bisexual lawmaker is known for her flashy fashion in the normally-drab legislative chamber, from colorful wigs to bold colored dresses, each of which got the internet talking. This time, however, it seems netizens went a bit further, hailing her for the fashion statement and passing around a link to order the $115 garment.

“You’re breaking the internet!” Sen. Mitt Romney (R-UT) can be heard telling the Arizona lawmaker in a comment picked up by her microphone during a roll-call vote to confirm Linda Thomas-Greenfield to be US ambassador to the United Nations.

“Good!” Sinema replied. It’s unclear what specific message she was attempting to send by wearing the shirt.

“You’re breaking the internet.” —@SenatorRomney to @kyrstensinema, who is presiding over the Senate in a DANGEROUS CREATURE shirt.

​However, at present Sinema is mostly a danger to attempts to add a $15 an hour minimum wage provision to US President Joe Biden’s COVID-19 relief bill. The measure is up for a vote later this week, but Sinema and another centrist Democrat, West Virginia Sen. Joe Manchin, are opposed to its inclusion. In the 100-person Senate, Democrats have only the narrowest of majorities with 50 lawmakers from their party; in the event of a tie, Vice President Kamala Harris, also a Democrat, would cast the tie-breaking vote.

Georgia Senate Runoff Races: All You Need to Know