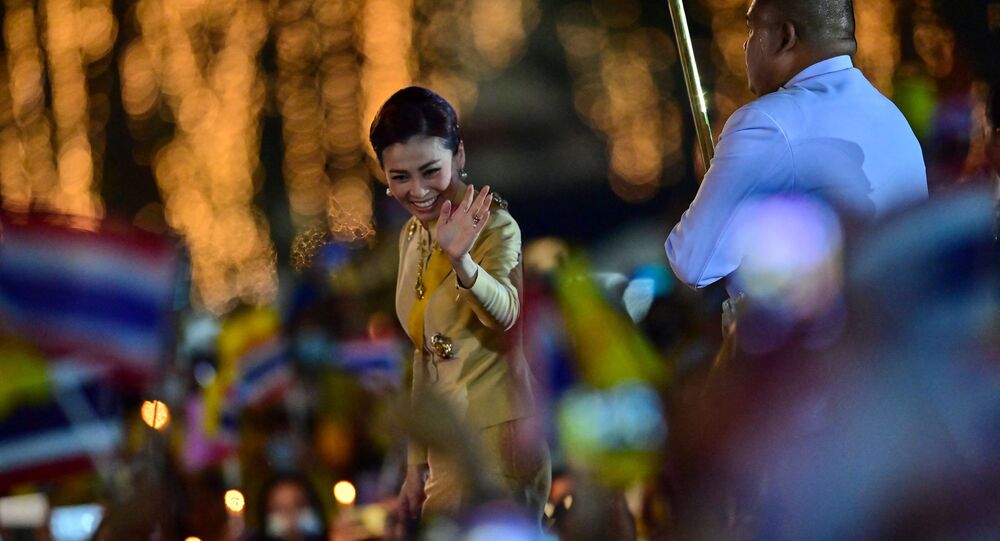 Thailand’s monarch King Maha Vajiralongkorn is living a life many would envy. In 2019, he named Major General Sineenat Wongvajirapakdi his royal consort alongside official wife Suthida Tidjai. The mistress, however, was soon stripped of all her titles and reportedly sent to jail. She made her way back to the royal court last year.

Thai Queen Suthida, wife of King Maha Vajiralongkorn, was finally spotted in public after months of absence and speculations about her whereabouts, the Daily Star reports, following a “nude” scandal that saw over a thousand of private photos of second royal consort Sineenat Wongvajirapakdi being leaked online.

The leakage of some “very explicit” images of the King’s mistress was seen by many as an attempt to sabotage Sineenat’s position within the court and publicly humiliate the woman following her return to high-profile “royal consort” status last year. Many journalists linked the scandal to internal rivalry between Queen Suthida and mistress Koi – as Sineenat is often nicknamed.

And then Queen Suthida disappeared from public sight.

According to the Daily Star, she was last spotted in person on 28 December but was nowhere to be seen during Sineenat’s 36th birthday celebration in January.

German tabloid Bild suggests that the occasion also marked Sineenat’s coronation as Thailand’s second queen, as the king and the consort were spotted wearing matching blue coats during a performance of Buddhist rituals.

But Queen Suthida has now reportedly re-emerged in public, as she was photographed alongside her King husband during a Chinese New Year celebration last week, the Daily Star claims.

Panjshir Resistance May Inspire Other Afghans to Rise Up Against Taliban

Gunshots Fired at US Cultural Centre in Yangon, Myanmar

Korea’s Kim Out of Public Eye for Almost One Month, Longest Absence in 2021, Seoul Says