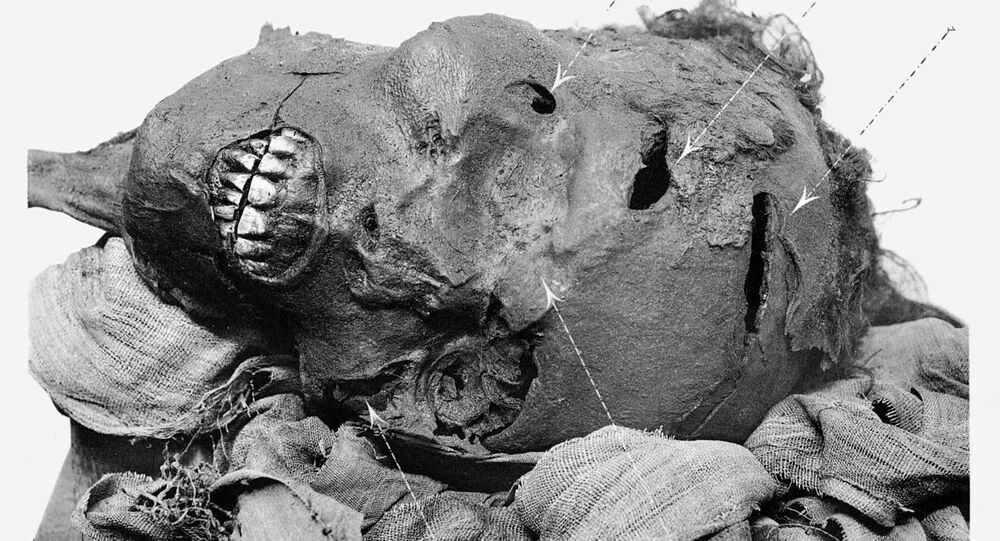 The new discoveries were made thanks to a CT scan of the pharaoh’s remains, as they revealed lesions that were carefully concealed by those who embalmed his body.

Seqenenre Tao, a pharaoh who ruled southern Egypt in the mid-16th century BC, met his end in a ceremonial execution conducted after he was captured in battle with a foreign Hyksos dynasty from the north, the Daily Mail reports.

According to the newspaper, since the pharaoh’s mummified remains, originally discovered in 1881 within the necropolis in Thebes, didn’t seem to have sustained any wounds, while his head bore indications of several severe injuries, the exact manner of his death has been a subject of debate.

A CT scan of the ruler’s remains, however, revealed “previously undetected lesions” that were apparently concealed by the people who performed the embalming, with scientists behind the new study determining that the pharaoh had his hands bound behind his back.

“This suggests that Seqenenre was really on the front line with his soldiers, risking his life to liberate Egypt,” said palaeoradiologist Sahar Saleem of Egypt’s Cairo University, author of the new study.

The researchers also established that the pharaoh was likely executed by several attackers, as the injuries upon his body were apparently delivered by five different Hyksos weapons.

“In a normal execution on a bound prisoner, it could be assumed that only one assailant strikes, possibly from different angles but not with different weapons”, Saleem remarked. “Seqenenre’s death was rather a ceremonial execution.”

Scientists Have Discovered What Disorders Interfere With Speech Development in Autism

‘Sky Ladder’ to Beam Humans, Cargo to Mars Reportedly in the Works as Part of China’s Space Goals