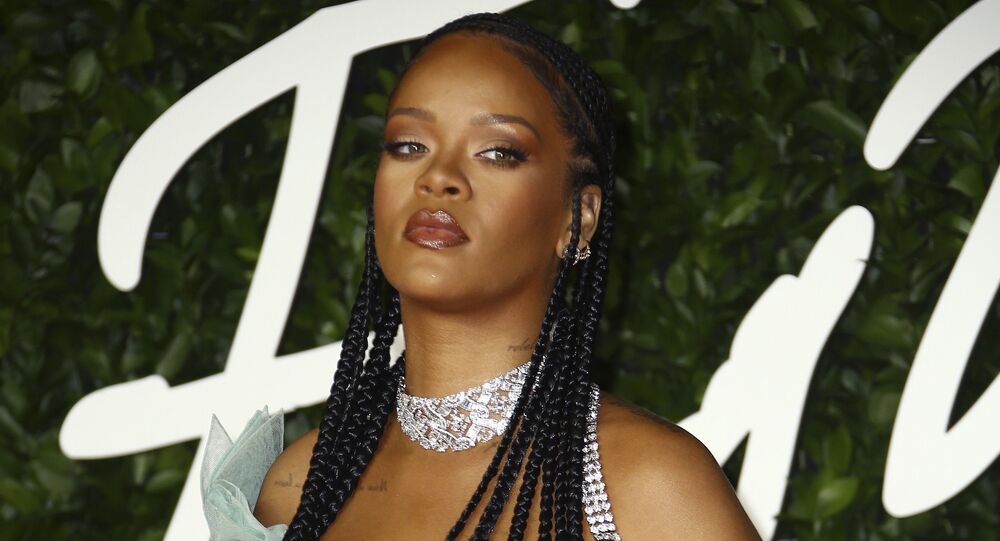 Over the past few days, Rihanna has managed to draw much attention and ire in India after she tweeted in support of the ongoing farmer’s protests in the Asian country – and helped escalate what Delhi calls its “internal matter” to an international level.

A large number of Indians have taken great offence after Rihanna, who is known for her bold fashion sense, shared a topless picture on Twitter and Instagram, sporting a long silver chain weighed down by a ‘Ganesha’ pendant, combined with a pair of purple shorts.

​Lord Ganesha is worshipped by millions of Hindus worldwide. With the head of an elephant and the body of a human, Lord Ganesha is believed to be someone who ends all miseries, according to Hindu mythology.

Now, the 32 year-old-singer is being called out by religiously-sensitive netizens, insisting that their deity is not a decorative jewellery item to be worn so “inappropriately”.

rihanna !! stop using my religion as an aesthetic !! that ganesh figurine at the end of the chain 🙁 is a holy and sacred figure for us hindus

Super offensive wearing Ganesha like that. My first god, a holy sentiment to millions of people celebrating Ganesh Chaturthi every year. Sorry RiRi, you disappointed me and others.

wearing that necklace, which depicts a hindu diety, is clearly cultural appropriation. my culture is not your aesthetic https://t.co/ccAhGcGH5q

​The controversial picture of Rihanna comes just four days after model Jhardan Reign posted some pictures of herself wearing lingerie and red wings in front of what appears to be a white Hindu ‘mandir’ (temple). In the now-deleted images, the model was shooting for Rihanna’s make-up brand Fenty Beauty.

On the 3rd of February, Jhardan Reign, a model from the United States of America tweeted a set of photos on Instagram. The photos appeared to be a promotional shoot for Fenty, the company owned by #Rihanna.

The pop star is being called our for using a ‘Mandir’ in the backdrop. pic.twitter.com/g2CCDEZJlS

​Previously, the singer has been called out for inking a misspelled Sanskrit quote from the Bhagavad Gita, one of Hinduism’s most revered scriptures, going down her right hip. Made in 2007, the Sanskrit tattoo was intended to translate into “forgiveness, honesty, suppression and control”.

Last week, Rihanna re-tweeted a news story on the internet shutdows in several areas of Delhi after a clash between farmer protesters and police officials turned violent on 26 January.

While some netizens applauded the music icon for supporting Indian farmers, India’s Ministry of External Affairs, in a statement, suggested foreign individuals should stay out of the country’s internal matters.

why aren’t we talking about this?! #FarmersProtest https://t.co/obmIlXhK9S

‘Sold All His Mansions to Live in a Box’: Get a Look at Tiny $50k Prefab House Elon Musk Rents