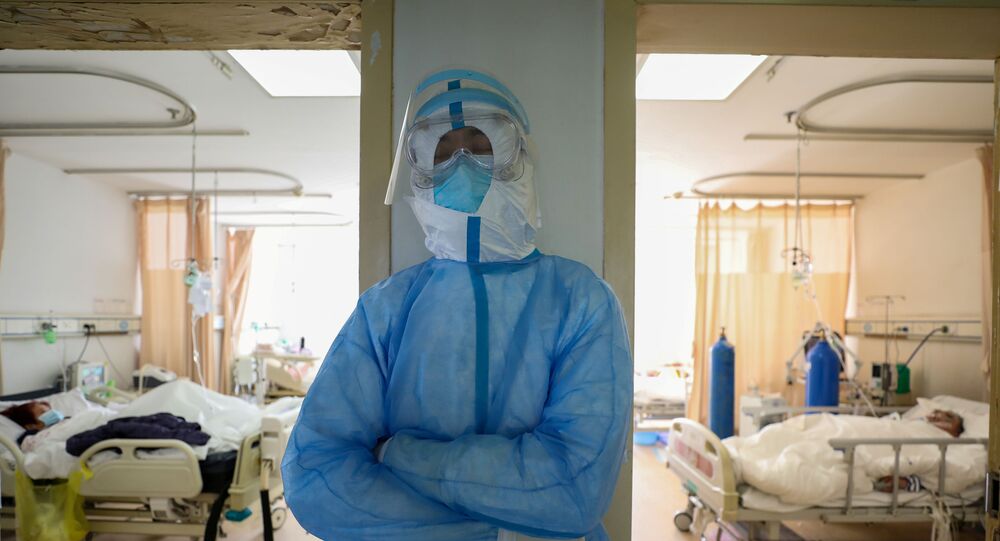 Power of people remembered as city recalls the early stage of the epidemic fight.

When residents in Wuhan, Central China’s Hubei Province, look back to the first one or two weeks after the city entered an unprecedented lockdown on January 23, 2020, some remember those days as a struggle with a feeling of helplessness amid chaos, as the city – the first hit by the pandemic – was not sufficiently prepared for it. More importantly, neither Wuhan nor the country had ever experienced such a huge outbreak of disease before.

Wang Wei, a social worker in Wuhan, who has been working in a local community for four years, told the Global Times that like many of her co-workers, they were exhausted every day in the early days of the lockdown when residential compounds were sealed off.

They had to handle numerous tasks at the same time: checking on residents’ health status every day, purchasing and delivering food and daily necessities, arranging transport for elderly people in the community to go to the hospital and so on.

“We faced a significant staff shortage,” she said.

She cried over the phone when she was speaking to the Global Times over the phone in mid-February 2020, the moment when the city recorded a surge in the numbers of COVID-19 patients, while the healthcare system in Wuhan was overwhelmed due to the lack of beds, medical supplies and medics.

The New York Times cited some local residents as saying that the city had moved on a year later, and some “warned against forgetting the pain after a scar heals.”

Some Western media outlets that covered the Wuhan lockdown failed to understand many social workers like Wang, who in addition to thousands of volunteers, grassroots heroes, non-governmental organizations and ordinary residents who experienced this crisis will never forget how the power of the people, under the leadership of the central and local governments, helped saved the city from the brink of falling into total chaos.

Power of the people

She had never imagined that one day she would become an ambulance driver. When the city began to lock down on January 23 last year, she embarked on her journey as a “life ferryman” the next day, which also marked the eve of Chinese Lunar New Year.

Learning that the front-line medical staff were in urgent need of protective supplies, she quickly organized a fleet of vehicles. The drivers worked for more than 10 hours a day to dispatch the donated protective supplies to medical staff, they also travelled all over the city to collect thousands of books for patients in Fangcang makeshift hospitals.

“I still remember the first day I drove an ambulance to bring six elderly patients to a hospital. It was a bright day in the morning, but it suddenly snowed,” Shi told the Global Times. “Ambulance drivers in hospitals were freaked out and did not dare continue their work, I decided to take on this job and encouraged three of my friends to join me, she said.

However, the hospital at that time was overloaded. When the patients were brought to the designated hospital, they had to wait for a long time until the hospital arranged a special space for them. “The patients were panic, anxious and gradually lost control. I was so afraid that they would rush out of the vehicle,” she said. It was the first time she felt the fear toward the coronavirus outbreak.

Shi said during the early days of the outbreak, she and other volunteers would drive to airports and train stations at midnight every day to “snatch” donated supplies from across the country.

During the city lockdown, volunteers who took on the task of delivering daily necessities, epidemic prevention and information checking were the backbone in preventing Wuhan from becoming paralyzed. According to local authorities, one in every seven residents worked as a volunteer, with in total 1.81 million people registered on the country’s volunteering services system. Among them, at least 23,000 millennials took part in over 500 programs across the city. They also participated in constructing  Fangcang makeshift hospitals and quarantine places, offering medical aid, and ensuring supplies, while about 950 volunteers helped 105 supermarkets across the city every day to box up products and deliver them to households.

Chen Xingxu, the founder of the volunteer group Wuhan 520 which focused on providing help for coronavirus patients in the city, told the Global Times that he decided to offer help for the COVID-19 patients because he sympathized with them, especially after he saw local hospitals were swarmed with mask-clad patients, who asked for treatment but could not get access to timely treatment in the early days of the outbreak.

Seeing posts circulating on social media platforms asking for the help, Chen and his friends registered their information, and reported those in need of assistance to local authorities and hospitals, checking on whether there were available beds when the whole city was facing the scarcity of medical resources.

“It was very hard to get an ambulance. Sometimes we couldn’t get in touch with local officials who were in charge of transporting patients to a hospital,” he said. They had to try different phone numbers to make things work out.

It was not only Wuhan residents that mobilized, many who were there for short-time stay offered to help out in a selfless way. Such acts of goodwill and gestures were also from the kindness rooted in the heart of the Chinese people who had experienced hard times before.

Long Xu, a Tibetan from Southwest China’s Sichuan Province, became stranded in Wuhan in January 2020 when he came to visit a relative. Long decided to volunteer in Huoshenshan, the emergency field hospital, the construction of which started the day after Wuhan imposed its lockdown.

He rode for four hours on a motorcycle to the place, slept only two hours a day to help build the COVID-19 treatment facility, and took care of patients. “How possible I am not scared? I was scared to death when I saw someone suddenly fall in front of me and pass out. My family also persuaded me not to go there. I used one thing to reason with them.”

He was determined to help Wuhan people because he saw many volunteers flock to his hometown Sichuan to help when a devastating earthquake hit the province in 2008 which claimed more than 70,000 lives.

After his volunteer work came to an end in Huoshenshan, Long volunteered to work in a nursing home to provide life necessities for seniors who were not able to go out.  “Every time I heard them calling me for help, it gave me a sense of satisfaction,” he said.

“Volunteers’ good deeds in my hometown are in my heart forever,” said Long, who decided to stay in Wuhan even after the lockdown was lifted. Now, he works as a community volunteer helping send food and supplies to a nursing home.

The top-down mobilization, led by the government and participated by social organizations and residents, is key to the success of closed-off residential management, which was common practice in early days of the epidemic. It is in contrast with community engagement in Western countries without a unified leadership of the government, which failed to contain the outbreaks, according to some Chinese experts.

Some Western media outlets questioned the power of the people in the fight, claiming that “the outbreak has exposed the powerlessness of private charities, civic groups” and other social organizations that could help the effort, as the NYT mentioned in an article in February 2020. A year on, it is time to correct this perception.

In comparing the role of community work and social mobilization in some Western countries like the US amid the pandemic, there cannot only be a reliance on grassroots power in fighting it when we clearly see the federal government of the US failed to coordinate and allocate resources, Wang Hongwei, a professor at the Renmin University of China’s School of Public Administration and Policy, told the Global Times.

“The efficacy of social mobilization should be built on an effective crisis-response mechanism, led by the government,” Wang said.

Under the leadership of the central government, China allocated massive medical resources during the outbreak in Wuhan, dispatching 346 medical teams during the lockdown, including more than 42,600 medics and over 900 public health workers, according to a white paper on China’s fight against COVID-19. From January 27 to March 19, 928,800 tons of epidemic prevention materials and daily necessities were sent to Hubei through railway, highway, water transportation, civil aviation and postal express delivery.

The response mechanism built on the epidemic fight in early 2020 is expected to continue function this year as sporadic clusters of infection have emerged in multiple places, especially in North and Northeast China. However, some cities in Jilin such as Tonghua have experienced a similar struggle like the early days of the Wuhan lockdown, and encountered the same problems of the lack of supplies and daily necessity deliveries, with posts circulating on Chinese social media platforms asking for help.

“It’s a test for local governance in how to fit in such social mobilization in face of a public crisis. We’ve made improvements over the past year, but we could do better,” Wang said.

This article was originally published on the Global Times