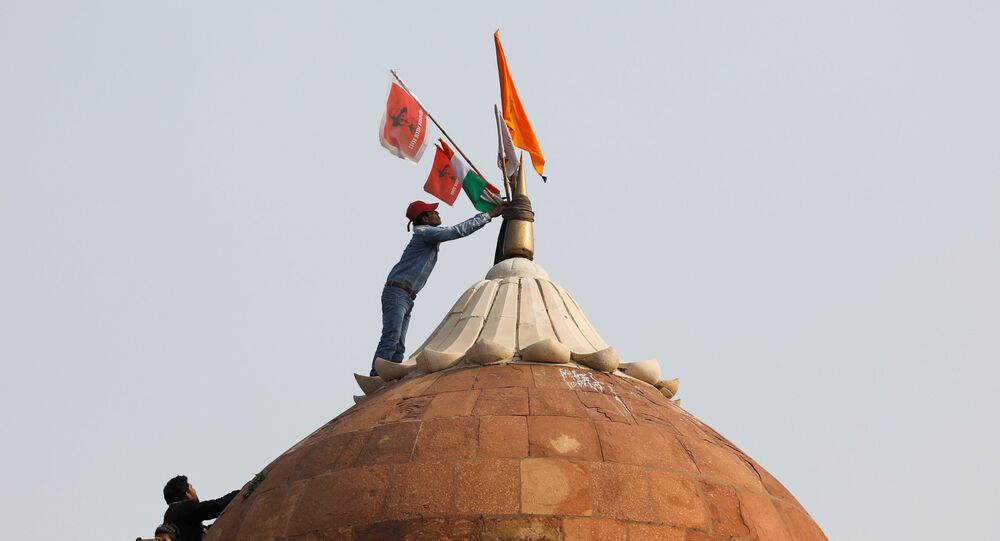 Thousands of farmers have been protesting on the borders of Delhi since 26 November, demanding the scrapping of three new farm laws – the Farmers Produce Trade and Commerce, the Farmers Agreement on Price Assurance and Farm Services, and the Amendment to the Essential Commodities Act 2020 – that were passed by the central government last September.

As a flag was hoisted over the iconic Red Fort in New Delhi on Tuesday afternoon by violent protesters opposing the new farm laws, the nation was left stunned.

The protesters, who arrived in India’s capital city mainly from Punjab and Haryana states to participate in a tractor rally, hoisted their flag on one of the several flag poles erected on the Red Fort.

A yellow coloured flag in the centre was hoisted at the historic fort. Indian prime ministers deliver the national address on Independence Day (15 August) from this fort, located in the Old Delhi area.

The incident, which occurred when India was commemorating its 72nd Republic Day, evoked massive reactions on social media.

However, the national Tricolour flag atop the Red Fort kept flying despite protesters invading the fort.

​This led to a deluge of stormy comments from people in India and Pakistan.

World must rise against an oppressive regime and take notice of madness ruling #Endia pic.twitter.com/InuYsZPqzG

​The flag was termed as a “Khalistani flag” by scores of netizens in India, who decried its hoisting.

The Khalistan movement refers to a longstanding demand to carve out a separate country called Khalistan from the state of Punjab, bordering Pakistan, in northern India.

This is very shameful to see this, I don’t understand, what are you wanting for, why govt is tolerating this;
Dear @narendramodi ji and @AmitShah ji we have voted you, not for this; these #khalistani and #UrbanNaxals terrorists need to be crushed now.#FarmersProstests https://t.co/Pd34dHIkCl

They are not farmers, they are terrorists assaulting the integrity and peace of the country.#दिल्ली_पुलिस_लठ_बजाओ #KhalistaniTerrorists #Khalistani pic.twitter.com/stYd8qv8Rp

This is murder! Using India flag while he is #Khalistani terrorist!

​However, many people acknowledged that the particular flag was that of the Sikh faith, called “Nishaan Sahib”, and not of Khalistan.

Talking to Sputnik, Ravinder Singh Robin, a noted freelance journalist, clarified that the flag is actually not the one of Khalistan.

“First, there is no registered Khalistani flag. The flag that was hoisted on the Red Fort by the protesters is that of Nishaan Sahib, a symbol of Sikh faith”, Singh explained.

“Some people call it Khalistani flag but it is not. What matters is why they are using this flag? Nishaan Sahib flag cannot be used for such agitation, I feel”, he added.

The Indian government has maintained that the farmers’ agitation on Delhi’s borders has been infiltrated by “Khalistanis” (activists seeking a separate homeland for Sikhs). During a hearing on the ongoing protests, the government told the apex court that “Those who organised rallies for Khalistan have put up flags at the protests”.

Amid COVID Outbreak, Christians Break With Tradition to Cremate Victims of Infection in Indian State