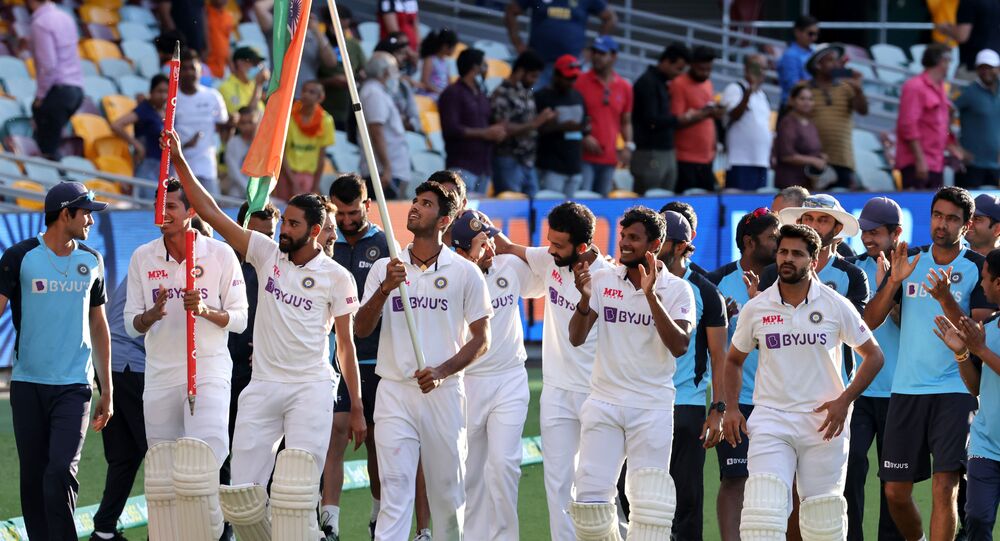 The Indian cricket team clinched a victory over Australia in the final Test of the four-match series at Brisbane’s Gabba Ground on Tuesday. The Indian triumph, which helped the team win the series, came despite it being bogged down by injuries of its key players in a series marred by racism allegations against Australian fans.

Indian social media users have appreciated the gesture of a Pakistani TV anchor who heaped praise on the Indian cricket team for its spectacular victory over Australia in Brisbane on Tuesday.

“This victory (of the Indian cricket team) will always be remembered. The Indian kids (reference to relatively inexperienced Indian players) beat Australia in their own backyard”, the anchor said during his broadcast.

“Look at circumstances under which they prevailed. They faced so many challenges, from injuries to being subjected to racist taunts. Yet, they prevailed…” he pointed out.

“The captain of the team had to fly back after the Test match to attend the birth of his kid. What an amazing gift his young team has given to him in this victory”, he said during his commentary.

The anchor was referring to the flight back home of Indian skipper Virat Kohli, whose pregnant wife Anushka Sharma was due to give birth after the first Test match in the four-match series.

“I have become a fan of Team India. I have no hesitation in saying that. Maybe the Pakistan team should pick its cues from India. I congratulate the Indian team and cricket fans from the bottom of my heart”, the anchor could also be heard saying.

The Pakistani commentator has garnered significant attention on the Indian segment of social media against the backdrop of strained ties between the sub-continental neighbours.

Way to build friendship, goodwill and peace between India and #Pakistan.

But not only Pakistan has praised the Indian team, as it has also won acclaim for its historic series victory at Brisbane’s Gabba Ground from across the Australian media.

“The day India bullied the bullies out of Fortress Gabba”, said the Melbourne-based Herald Sun, adding that the home team was no longer the “bully boys” of the game. “They have been stared down by the implacable forces of the Indian team”.

Amid Border Tensions, the Indian Army Returns 13 Chinese Yaks That Strayed Onto its Territory