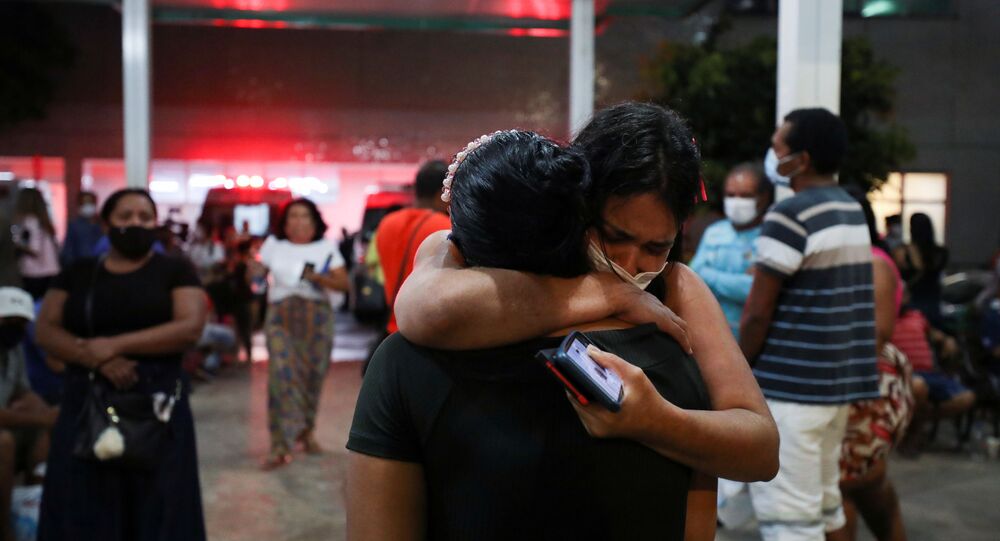 Manaus, the capital city of Brazil’s largest state, Amazonas, has its healthcare system now pushed to the breaking point as coronavirus cases soar and hospitals run out of beds and oxygen. State authorities have declared a curfew to slow the spread of the pandemic.

Healthcare workers in Brazil’s Amazonas state took to social media on Thursday, begging for help amid a dire situation with oxygen shortages in hospitals of Manaus – the state’s capital city.

Bitterly denouncing the situation, people sent desperate messages, asking to share them in social media and reaching out to media figures online. Some people urge those who can to bring oxygen, which is essential in treating COVID patients with respiratory complications, to the hospitals.

According to official figures, Manaus is breaking dismal records for the fourth day straight, burying 198 people, with 87 deaths coronavirus-related.

Amazonas’ governor, Wilson Lima, on Thursday imposed a curfew, which will begin Friday and last from 7:00 p.m. to 6:00 a.m.​

“These are difficult but necessary measures,” Lima said, referring to the imposed curfew. “We are in a war operation.”

According to Amazonas governor, the state is currently “in the most critical moment of the pandemic.”

“We’re in an appalling state”, a female medical worker on a video said. “The whole unit’s oxygen has simply run out and there are many people dying. Anyone who has any oxygen available please bring it to the clinic [near the airport]. There are so many people dying, for the love of God.”

While some call for help, others are in an even more desperate state, as users tweet that “people are suffocating to death”.

​”Manaus” has propelled to worldwide trends with over a million tweets. Brazilian vice-president Hamilton Mourão said that military aircraft are transporting additional medical supplies and oxygen cylinders to the state.

On Tuesday, the Brazilian president, Jair Bolsonaro, cited by Folha De S.Paulo, denounced state authorities for “letting go” of the oxygen meant for the coronavirus patients.

Brazil has registered over 8,3 million cases of coronavirus, with more than 207,000 related deaths, according to Johns Hopkins University data.