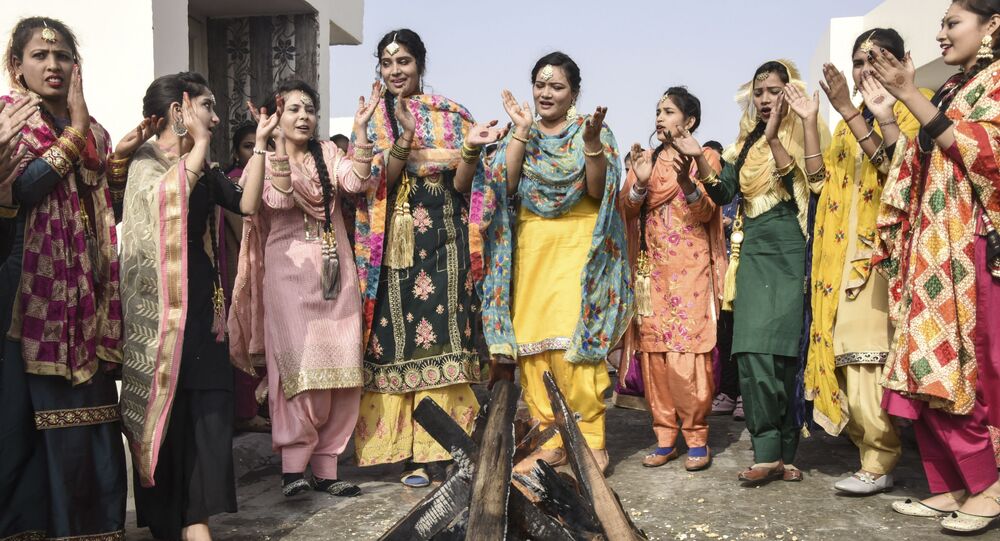 From bonfires, singing and dancing to the all-night beating of the dhol drum and all-day kite flying, not to mention the gala feast, the harvesting festivals of India including Lohri, Makar Sankranti, Pongal and Bihu are being celebrated with much jubilation on 13 and 14 January every year.

Keeping the festive spirit high despite the COVID-19 pandemic, millions across India are celebrating harvest festivals which include Lohri, Makar Sankranti, Pongal and Bihu.

“India is enormously dependent on agriculture and so harvest becomes one of the most important events across the nation. Every state celebrates the festival in different ways hence, they have been given distinctive names such as Lohri, Makar Sankranti, Bihu and Pongal. People offer gratitude to nature for the plenty it offers in the form of new crops”, Roshan Mendonsa, a chef and assistant general manager of Hyatt Place in the state of Karnataka, tells Sputnik.

Chef Ashish Bhasin of The Leela Palace, Delhi, adds that apart from offering gratitude to nature, “the festival also marks the culmination of the winter solstice for India and the onset of summer. The days become longer”.

Though the pandemic might have cut down on the grand celebrations because if limits on social gatherings, it has certainly not stopped people from celebrating the festival with a gala feast at their home and exchanging gifts.

Here is how India is celebrating the harvesting festival with distinctive flavours on the platter.

“During Lohri, people bid adieu to winter by dancing around the bonfire and singing the popular Punjabi song Sundri Mundari Ho. They offer a little bit of groundnut and corn to the fire in respect,” Bhasin says.

The Lohri feast comprises Makki ki roti, sarso ka saag, and sweets made of jaggery that are not just healthy but good winter food too.

“Jaggery – made of sugarcane – is produced in large numbers and is the healthiest sweet that produces warmth in your body. Sesame seeds that we have during the week-long festival help in absorption of vitamin D since a lot of people spend time soaking up the sun”, Bhasin adds.

“One of the most popular delicacies “Gokul Pithe” is a lip-smacking dessert made of rice, coconut and jaggery. This jaggery is special as it is called Nalen Gur which is a seasonal ingredient available only at this time of year. People serve traditional Khichdi in the main course which is made differently in each state. It is also famous as the kite-flying festival and large numbers of people participate in it”, Mendonsa tells Sputnik.

“People celebrate Pongal by praying to the Sun god and Lord Indra and thanking them for helping the farmers to grow and yield better crops. People make rangoli which is an artwork on the floor. Pongal is also the name of a dish which they make during this time. Freshly harvested rice is cooked in milk in a clay pot until it boils over and added jaggery, and nuts”, Avinash Jha, executive chef of the Radisson Blu hotel in Delhi, tells Sputnik.

As the harvest festival goes by we have an everlasting taste of the food. Let as us make this traditional meal a memorable one.
Have this Pongal Sapad on a banana leaf and include all your favorites like Vazha Thandu Poriyal, Medu Vada, Ven Pongal and m… https://t.co/saYOxfJpzJ pic.twitter.com/XLSg1zNrA0

“Bihu is celebrated with singing, folklore and dancing and embraces the cultivation of rice by making delicacies – especially Pitha which is made up of coconut and jaggery and is much loved. They also make rice beer and rice khichdi around this time”, Avinash tells Sputnik.