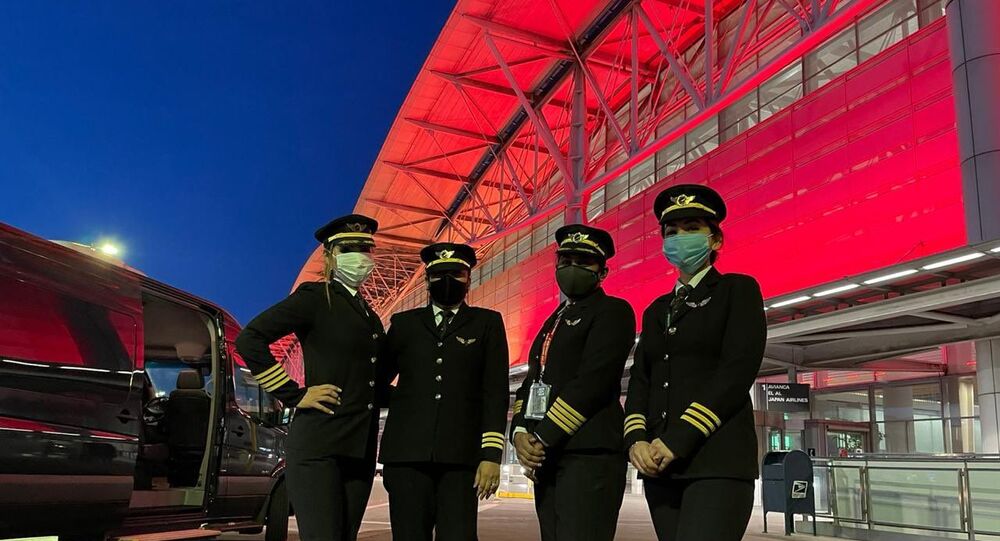 An all-women team of the Indian national carrier Air India made history when they piloted the longest non-stop commercial flight from San Francisco to Bengaluru. They flew over the North Pole and very close to the thin ozone layer during their journey of over 16,000 kilometres.

The ever smiling, passionate and energetic Captain Zoya Agarwal, the commander of a historic Air India flight, talks about her journey to become a pilot as well as her hardships climbing up the ladder and breaking the glass ceiling in an interview with Sputnik.

Sputnik Why is it difficult to fly over the North Pole?

Captain Zoya Agarwal: There are many parameters and requirements – in terms of logistics and technicalities – over and above a normal flight when one does a Polar flight. The cosmic radiation parameters, the fuel temperature parameters, and the weather gods need to be shining on us to make it a successful flight. There is a requirement of Polar suits on board the flight which are very heavy and expensive. We were flying closer to the ozone layer that is very thin, so there is a risk of radiation exposure. The temperature outside could be as low as -30 degrees Celsius. However, I was very focused and never looked back.

Sputnik: Amid the pandemic, when everything looked gloomy, how did this flight lift your spirits?

Captain Zoya Agarwal: In the ongoing pandemic, this flight not only gave the all-women crew on board a boost, but the passengers too were quite gung-ho. This flight was special as there were many firsts attached to it – not just that it was the longest flight ever achieved by an Indian airline with an all-woman crew, but I made the maximum announcements to the curious passengers. I gave them all the details of flying over the North Pole and about this Polar flight. It was surely a historic flight. This is indeed the silver lining to the dark clouds, if I may describe it so.

​Sputnik: How have your family members reacted to this flight?

Captain Zoya Agarwal: My mother cried when I had become a captain. My mother was thrilled… She had tears of joy in her eyes that her daughter could accomplish this feat. Today, the tears of fear have turned into tears of joy.

We also congratulate passengers of AI176 for being part of this historic moment. pic.twitter.com/UFUjvvG01h

Sputnik: As a woman, what inspired you to choose this profession of becoming a pilot?

Captain Zoya Agarwal: I am a dreamy person. As an eight-year-old, with dreams in my eyes, I would sit on the terrace of my ancestral house and do star-gazing as I was fond of it. I would see jumbo jets fly past and thought to myself if I could possibly fly one of those one day. The thought of flying stayed with me and became my passion.

I am from a very mediocre background, where my parents were very conservative. When I broke the news to my parents that I wanted to become a pilot, my mother had tears in her eyes. She wanted me to follow the traditional path of getting married, have kids. I was academically inclined and took admission in the science stream at Delhi University’s St. Stephen’s College. Alongside my three years of graduation, I also took my aviation exams. I burned the midnight oil. Sometimes, there was no electricity at my home, I would study under the street lamppost. After the end of three years, my parents had mercy on me. They have sacrificed a lot for me. I am grateful to them.

It was very tough to get a job as a pilot, but I got my breakthrough in 2004 when I joined Air India. My father had a heart attack, he had an open-heart surgery. He knew I had got a job with Air India and we would take off the financial burden, so he recovered faster.

Sputnik: How has your journey with Air India been so far?

Captain Zoya Agarwal: When I was looking for a job as a pilot, there were not many jobs in the aviation sector for women pilots. A lot of major carriers would not take on board women pilots. Many carriers considered women pilots as a big headache because there’s a lot of financial cost that’s associated, which is understandable from their perspective, and it did look discriminatory. However, I have had a great journey with Air India. I am grateful to the national carrier as it is an equal opportunity employer.

Yes, I had to work hard as the aircraft does not know who is flying it. You have to prove your merit, only then you rise up. I have flown various planes and today I commanded the feat of operating a Boeing 777-200LR on the longest direct route flight from San Francisco to Bengaluru. It was an inaugural flight over the North Pole and we covered an aerial distance of about 16,000 kilometres.

Today, we created world history by not only flying over the North Pole but also by having all women pilots who successfully did it. We are extremely happy and proud to be part of it. This route has saved 10 tonnes of fuel: Captain Zoya Aggarwal at Bengaluru airport https://t.co/wRyNNKC4GJ pic.twitter.com/q8jZgB6HBt

​Sputnik: What is your message to the young girls of India?

Captain Zoya Agarwal: I do a lot of social work. I want to inspire girls. I go to many schools and carry a paper with the word “IMPOSSIBLE” and show it to the girls and ask them which one of you can see what I see in it. Some of them are able to read what I can read as “I-M-Possible”. My message to these girls is to be meticulous, work hard, focus on their goals, and how they will be able to get success. And to the rest of the girls, I say every great reality begins with a great dreamer, and that dreamer is only “you”. After all, the plane also takes off against the wind.