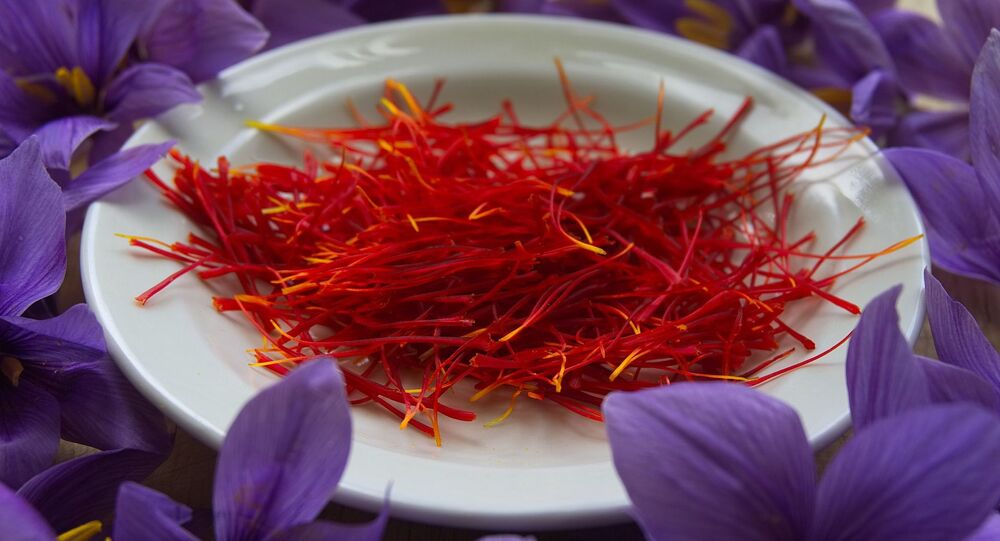 Kashmiri saffron, sought-after for centuries as an exotic spice, a dye and medicine, belongs to the crocus family. The Kashmir valley produces some of the best saffron in the world, which is also the most expensive spice in the world.

Kashmir, a mountainous valley that borders Pakistan and India, is not only known for its picturesque beauty, but for many farm products, including saffron.

In a bid to boost the heritage brand of the spice – which is also popularly known as ‘zaffran’ – in July 2020 the Indian government gave it a geographical indication (GI) which means that only that region can produce the luxury good, rather like the Appellation d’Origine Controlee which protects the provenance of Champagne, Parmesan and Cornish Pasties.

Prime Minister Narendra Modi in his monthly radio address “Mann ki Baat” (From the Heart) appealed to the people to make it a globally popular brand. Despite such a push, cultivation of the purple flower is witnessing a decline with each passing year.

The “Saffron Town” of Kashmir

Saffron farming is done in four districts of Jammu and Kashmir – Pulwama, Budgam, Srinagar and Kishtwar. However, it is the historical town of Pampore in Pulwama district which has earned for itself the title of Kashmir’s “saffron town”.

Saffron farmer Rashid Ali tells Sputnik that red soil is mostly found in Pampore and is naturally fertilized to grow the flower. “The soil in other places in the valley requires a lot of hard work for saffron cultivation,” he says. “We need to put in things such as compost etc. But this red soil is strong from inside and is a gift from God to nature for saffron.”

Pampore is on the outskirts of Kashmir’s capital Srinagar. Cultivation of this heritage crop has been the family occupation of hundreds of Kashmiris for decades. They plant the indigenous crocus flower on thousands of hectares to produce it.

“Earlier it used to take two days to hand-pick all the saffron flowers, but nowadays in half an hour we are able to pick all the purple bulbs from the entire field. As saffron farming is proving not to be profitable, many farmers are selling their land and, houses are being built on the land. It is very disheartening,” saffron grower Amir Rafeeq says.

Like many others, Aafreen Jan and her family have been growing saffron for several decades. “My family built a house, invested money in education and settling children from whatever income they made from this cultivation. For some time now we have witnessed a fall in production because of climate change and this has halted these expenses. The family is beginning to lose hope that they will be able to increase the production of the crop,” she says.

Climate change is considered the main reason this heritage crop is no longer cultivated as much as it had been. In Kashmir, production of this exotic spice has fallen significantly and many farmers are either selling their farms or shifting to apple or walnut cultivation that is more profitable to them.

“The area of saffron cultivation is shrinking in the Kashmir valley because of lack of proper irrigation facilities. This crop is suffering from little or no water. Farmers depend on a few boreholes installed by the government, which is not enough,” Gouse Qadri, a trader and exporter of Kashmiri saffron – Kesar Impex – tells Sputnik.

Saffron grower Amir Rafeeq says, “The valley has received less rainfall in the past few years and this has hit the saffron farmers. With continuous climate change the production of this spice can be affected in times to come”.

Official land records show that the area under saffron cultivation shrank to 3,700 hectares in recent years, from the 5,700 hectares in 1996. The Indian government has launched the National Saffron Mission to boost the production of saffron but it failed to halt the decline which can be evident from the Agriculture Ministry data as the production declined from 16 metric tons to less than six metric tons in the past 20 years.

It is believed that Iranian saints on missionary expeditions brought this “red gold” to the region. Trader Gouse Qadri says that saffron costs around $2,700 per kilogram. “Hundreds of flowers together make just 1 gram of the spice. Each flower has three red stigmas in it and that needs to be carefully hand-picked. No machine can do the delicate work to harvest these thin threads. It takes hours and hours to produce 1kg of this high-quality saffron and that is why the spice is expensive.”

Rafeeq adds: “If we compare with other spices – in one acre 600kg of cumin can be grown, or 350kg of nutmeg, but only 1.8kg of saffron can be grown in that area. There is high demand for this spice, so many adulterate it or produce fake saffron.”

Kashmir grows only 5 percent of the world’s production and Iran produces 90percent of global demand.

Kashmiris claimed that Iranian saffron has a huge impact on their businesses as local traders sell an inferior Iranian product as Kashmiri.

Kashmiri saffron, also known as ‘Zaffran’, is renowned globally as a spice which has many medicinal benefits. Mohammed Adil, an event and Kashmiri wedding planner, tells Sputnik: “Saffron is deeply associated with the traditional Kashmiri cuisine such as Wazwan. It is used in Kashmiri tea “Kahwah”, and rice dishes, non-vegetarian dishes and sweet dishes are incomplete without its use. The spice has many medicinal values too.”

Ghouse Qadri adds: “Kashmir saffron is considered a panacea against a wide range of diseases, afflictions and disabilities. This ingredient is the greatest choice among herbalists, practitioners of Ayurveda, Siddha and the Chinese system of medicine. Modern beauty product experts vouch for its potent results.”