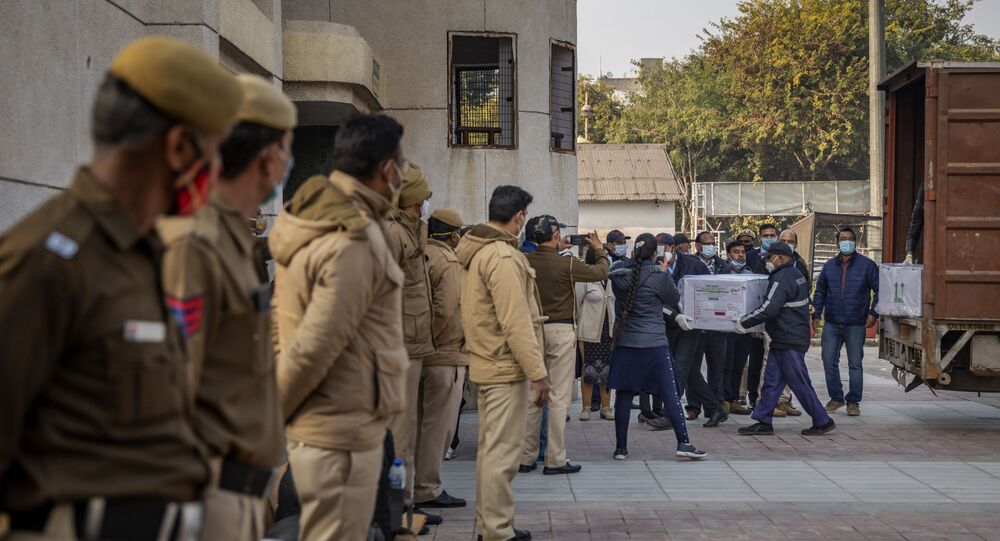 Tuesday marked the first day of the COVID-19 vaccine delivery in India. A total of 5.65 million vaccine doses were transported to various parts of the country from the Pune city of Maharashtra state.

As the Delhi Police is set to safeguard the Covid-19 vaccine, fears grow there could be burglary at crowded vaccine storage centres. In view of such a probability, it is being ensured that proper measures are in place to thwart any such incident.

Speaking to Sputnik, a senior official of the Delhi Police said that recently a meeting was held with the in-charges of the centres and they were instructed to also deploy a private security guard and install Close Circuit TVs (CCTVs).

“Instructions have been issued to all the deputy police commissioners of Delhi regarding the security arrangements and crowd management at the vaccination centres,” the official said while requesting anonymity.

The police officer said that the vaccine doses will be safeguarded with as much caution as ballot papers, for which a three-layer security – CCTV cameras, Delhi Police and hospital’s own security staff will be put in place around the storage facility.

“However, burglary is a major threat at the centres, which might see some crowding. If required, paramilitary personnel will also be deployed at sensitive centres. The areas will be guarded round-the-clock by police personnel. They will make sure that the law and order situation is under control,” the official shared.

On Tuesday, India’s national capital city of New Delhi received a total of 264,000 Covishield vaccine doses that were taken to a storage center amid high security.

Meanwhile, in an official statement earlier, Special Commissioner of Delhi Police (Operations and Licensing), Muktesh Chander stated that the security force ensured a smooth transportation of vaccines from the airport to vaccine storage center where adequate security arrangements have been made.

“Similarly, when the vaccines will be distributed, we will ensure adequate security arrangements. They will be escorted smoothly and necessary arrangements will be made at the 89 vaccination centres in Delhi,” Chander stated.

The vaccination drive is set to commence across India, including in the national capital, from 16 January. With as many as 30 million health and other frontline workers are to be the first in line to receive the shot.

Meanwhile, as per the government’s official data, India’s tally of coronavirus affected people reached 10.04 million on Wednesday after a total of 15,968 new cases were reported in the preceding 24 hours. The total number of recovered patients have reached 10.01 million and 151,529 people have died so far.

‘There is a Chinese Mole in the Defence Ministry,’ Alleges India’s Former Home Minister

India Teams Up With Japan to Work on 5G, Telecom Security Amid Hostile Relations With China