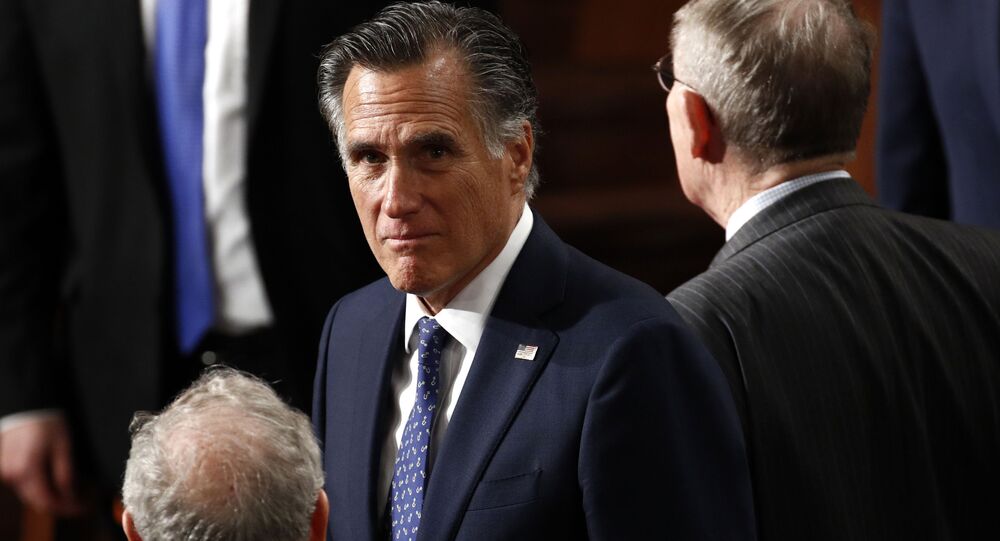 The Utah senator refused to support an initiative by fellow Republicans to challenge the results of the presidential election during their upcoming certification in Congress. Romney slammed the idea as a threat to the country.

The latest initiative by Republicans to prevent Democrat Joe Biden from taking office, namely to deny certification of the election results in the US Congress, has so far failed to gain broad support in the ranks of the GOP, but has already landed in hot water after the chairman of the Texas State Republican Executive Committee, Terry Harper, appeared to suggest that Senator Mitt Romney should be executed over his criticism of the idea.

Romney blasted the initiative to thwart the certification of the election results as an “egregious ploy” aimed at serving the “political ambition” of some lawmakers, while posing a threat to “our Democratic Republic”. The Utah senator argued that the election results were legit and that Trump had more than enough chances to prove otherwise. Harper, however, reacted harshly to his statement in a now-deleted tweet:

“Romney should be introduced to our friend Mr Guillotine”, Harper wrote.

The incendiary tweet grabbed netizens’ attention despite being deleted soon after publication. Many of them strongly condemned Harper’s “suggestion”, arguing that such statements are extremely dangerous.

#txlege @TXGOP #TerryHarper So now Republicans are wanting to behead their fellow Republicans. Harper wants Sen. Romney to be introduced to a guillotine for accepting the Electoral College votes going to President Biden. Harper, you’re a jackass. https://t.co/ZvvUrxfYnF

2020 is clawing it’s way back to life like a bad movie pic.twitter.com/zEwT6cyroF

Some Twitterians suggested it’s not Romney’s head that should be on a guillotine, pointing out that Harper should probably have a taste of his own medicine.

Terry Harper should stick his brass balls in the guillotine but unlike Romney, he doesn’t have any.

Many social media users rushed to Romney’s aid, defending the GOP senator for all sorts of reasons… even some very unexpected ones, such as his hairstyle, which would be totally ruined should his head be put on the chopping block.

Mitt Romney had the temerity to defend American democracy from the dangerous and disgraceful tactics of the 11 Senate Republicans joining Josh Hawley, and in response, a Texas legislator is saying Romney should meet the guillotine. https://t.co/90BdHbMFOf

A guillotine would seriously mess up Romney’s meticulously coiffed head and, I, for one will not allow that.

Some even suggested that law enforcement should look into the Texas GOP chairman’s “threats”.

That’s not just a death threat but potentially advocating the use of violence to overthrow the government, a federal felony punishable by 20 years in prison.

Several netizens, however, argued that Harper’s comment could hardly be assessed as a threat and instead must be treated as an “opinion” of sorts.

That’s not a threat. He can share an opinion. Now if he said, “I’m going to put Romney in a guillotine”, then it is a threat. Next time, instead of saying dumb stuff, think before you speak.

Others simply stated that Harper had “a point” in what he was proposing.

Oscars 2021: Chadwick Boseman Wins a Best Actor Nomination From Beyond the Grave

One killed, Two Injured in Shooting Spree at a Supermarket on New York’s Long Island

‘Our Country is Being Destroyed’: Trump Blasts Biden Admin as ‘Disaster’ Bound to ‘Get Worse’