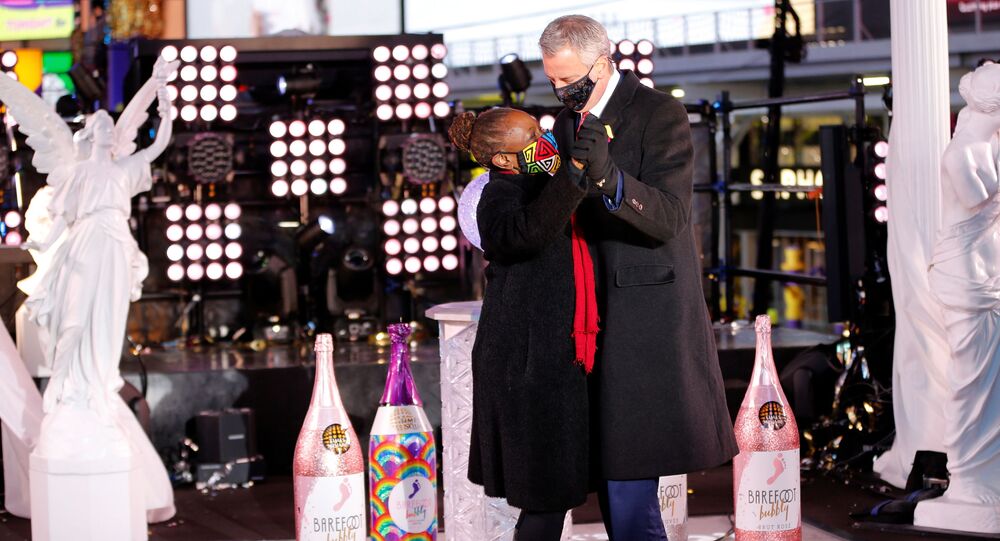 Following a full lockdown last spring, New York City, which was the world’s biggest COVID-19 hotspot in the early stages of the coronavirus pandemic, is currently under a partial lockdown. A couple of weeks ago, Mayor Bill de Blasio said the city could see another full lockdown after being overwhelmed by a second wave COVID-19 cases.

New York City Mayor Bill de Blasio is facing criticism over dancing with his wife on New Year’s Eve in Times Square, an area mostly deserted due to COVID-19 restrictions.

In a moment aired on national TV networks, de Blasio danced onstage and danced with his wife, Chirlane McCray, at the Big Apple’s famous landmark, which is usually packed with revelers doing the same at this time of the year.

“You’ve always been basically the worst political in modern history – but shutting down the NYC but having your own private party in Times Square is really *chefs kiss* the most tone deaf thing I may have ever seen a Mayor do. Everyone hates you DeBlasio,” McCain tweeted, sharing a video of the NYC mayor dancing in Times Square.

Schneider slammed de Blasio for restricting New Yorkers from gathering at the city landmark because “it isn’t safe” amid the ongoing pandemic, “except [for] the mayor and his wife”.

Nobody can be in Times Square!!! It isn’t safe! Except the mayor and his wife. https://t.co/vHcnZ5PVMr

So average people can’t dance there but you can? Nice! We are all equal but some are more equal than others.

The mayor enjoying a private dance party in time square, all paid for by the tax payer, while citizens told to stay in their homes and hide.

Wow and then you had the audacity to post this on social media. They are rubbing it in your face people! Why are you letting them steal your freedoms?

De Blasio was also criticized by CNN host Cohen, accompanied by co-host Cooper, during a live show celebrating New Year’s Eve. Cohen was seen to knock back a shot of tequila before diving into a brief but angry rant.

“That’s how I felt when I saw Mayor de Blasio dancing just now,” Cohen told Cooper, referencing the clip of the mayor dancing in Time Square. “I just don’t need to see that in the beginning of 2021.”

The host called on de Blasio to “do something with this city! Honestly, get it together”.

A mini-rant from @andy on Bill de Blasio dancing at midnight — “do something with this CITY!” — to kick off your 2021: pic.twitter.com/XpA9zR7oEm

A spokesperson for the mayor said in a statement to Fox News that the incident is “Not the first time I’ve heard a drunk person complain about someone’s dance moves.”

New York City is currently under tight COVID-19 restrictions, despite the start of mass vaccinations in the city and across the United States. In mid-December 2020, de Blasio said he might place the Big Apple under a second full lockdown over fears of the city being overwhelmed by new infection cases and hospitalizations, as Christmas and the New Year were approaching.

‘Your Days Are Numbered’: Florida Woman Who Claims Kamala Harris is ‘Not Actually Black’ Charged for Threats to Kill VP

Capitol Riot Probe: Will Dems Use ‘Benghazi Playbook’ Against Trump & GOP Ahead of Midterms?